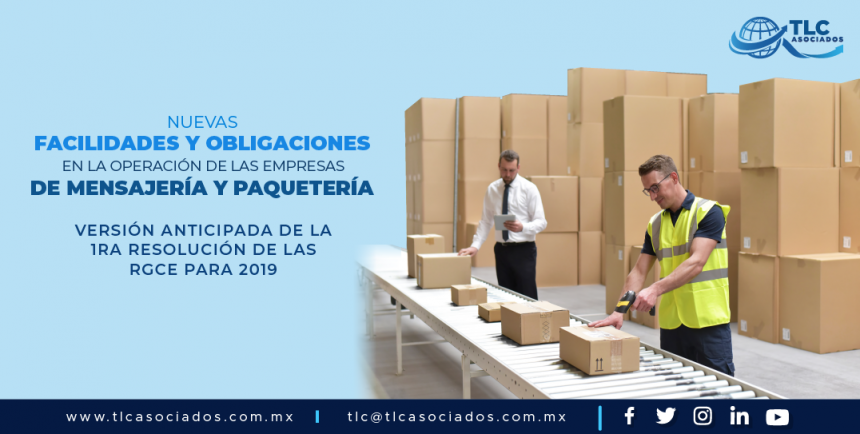 Once again, the procedures for customs control to carry out simplified import operations of goods by courier and parcel companies are amended.

Since the “Third Resolution of the Amendments made to the General Rules of Foreign Trade (RGCE) for 2018” published in the Official Journal of the Federation on November 30, 2018, duties were added for the import operations of courier and parcel companies.

Subsequently, these provisions were extended in the “Fifth Resolution of the Amendments made to the General Rules of Foreign Trade for 2018” which was made public on March 30 of 2019 indicating that it would be applied as of June 1st of 2019 and the enforceability of the registration which would be on October 1, 2019.

I. Registration of Courier and Parcel Companies.

a) In simplified operations involving the same consignee or recipient or where the same delivery address is indicated in more than 5 import operations of goods, in a calendar month, a notice must be submitted by e-mail within 10 working days of the month following the Central Customs Investigation Administration of the AGA. (Customs form 124/LA).

b) In simplified operations with a value of less than $1,000 USD per air traffic, they must electronically transmit the information required from the pedimentos within 5 working days of the following month to the AGA’s Central Customs Investigation Administration. (Customs form 125/LA).

It is worth mentioning that the information the courier and parcel companies must provide to the customs authority is only for operations made by air traffic, making it feasible to consider it as a benefit for formalities carried out using another type of traffic.

c) Companies that do not send the requested information will be sanctioned for omission, in accordance to the Customs Law regardless that they are still obliged to submit it within a period of no more than 15 working days.

II. Simplified Clearance with a Value Over $1000 USD.

a) The order assigned to the customs agency is added. (Section I)

b) The Digital Tax Receipt issued on the Internet (CFDI), as well as its equivalent document, must be attached to the import pedimento. (Section VI)

c) An obligation to provide online access to their risk analysis system to the customs office where they will carry out their operations is introduced. (Section IX)

III. Simplified Clearance with a Value less than $1000 USD.

Lastly, courier and parcel delivery companies may use the simplified clearance procedures provided that they submit or have submitted the corresponding application before October 1, 2019, complying with the requirements of form 78/LA, and until the competent authority resolves the respective authorization, which shall not exceed December 1, 2019 in accordance with section V of the Single Transitory of the “Advance Version of the 1st Resolution of Modifications of the General Rules of Foreign Trade for 2019”.

In TLC Asociados, we develop a multidisciplinary team of experts in audits and risk analysis for consulting, implementing strategies and complying with foreign trade operations.