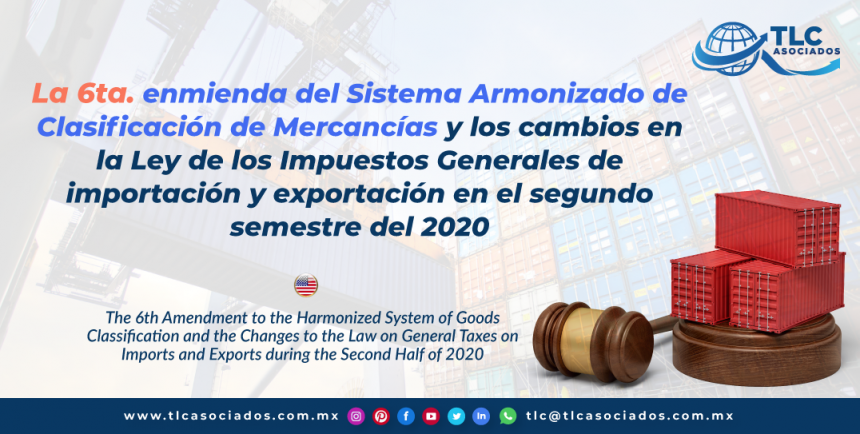 The Harmonized Commodity Coding System, in simple terms, is a dictionary where all goods subject to foreign trade in the world are grouped and coded with a number of up to 6 digits, with the intention that the diversity of ideas and concepts that the language takes does not affect trade, being a unified and universal language for the global exchange of goods.

With a periodicity of 5 years, the World Customs Organization (WCO) issues changes that derive from the intervention of all protocols and multilateral agreements, being binding and obligatory for the 183 countries signatories of the Convention of the Harmonized System, including Mexico.

In the world of international trade, the Sixth Amendment to the Harmonized System was updated and entered into force on January 1, 2017. Over the course of these years, the 183 member countries of the WCO committed themselves to making the 487 changes agreed upon within this body, which included the elimination, creation and editing of Section Legal Notes, Chapter Legal Notes, text of Items, Legal Notes and text of Sub-Items of the instrument.

There are few countries, among them Mexico, that after 3 years have not incorporated these modifications, which has generated that Mexican businessmen have difficulties when issuing or receiving certificates of origin, because these documents require the specification of the updated tariff classification in the world.

The structure of the Harmonized System is 1,224 items with the elimination of three and the creation of one, remaining at 1,222 items; and 5,202 sub items that are updated to 5,387 in this sixth amendment, this update should be reflected in our customs legal system since 2017.

At the moment, the World Customs Organization is analyzing the seventh amendment, which will be released this year so that countries can make the relevant changes in 2021 and it will enter into force in 2022. This practice, as already mentioned, is carried out every five years, and this seventh amendment will attempt to cover around 350 changes, that is to say, goods that must be incorporated, definitions that must be improved and even others that are eliminated because they are considered obsolete.

In the particular case of the reform, those related to the sixth amendment are being substantially implemented and incorporating some that Mexico considers essential to statistically control Mexico’s trade movements in the world.

The proposal of the new law under discussion in the Senate of the Republic reduces the number of current tariff items from 12,578 to 7,792, that is, a reduction of 38%. However, 10,279 statistical codes are expected to be considered.

The so-called reduction of tariff items is a unification of the items that have the same tariff and the same regulations, assimilating them to a generic item or the others. However, with the creation of the Trade Identification Numbers (TIN), items are opened to contemplate specific goods and the real reduction is equivalent to 19% not 38%.

The incorporation of “Trade Identification Numbers (TIN)”, derives from a suggestion by the World Customs Organization that the creation of 10-digit tariff bands or the addition of the fifth pair is necessary to improve the control of international trade statistics.

This reformed and updated Law will have two articles, but let us remember that since its publication on June 18, 2007, the Congress of the United Mexican States issued the Law of General Taxes on Imports and Exports, under this structure, considering the same as currently the articles:

The work would not conclude with the updating of the Law, since subsequently, the Ministry of Economy must publish in the Official Journal of the Federation (DOF) the agreements of the “Commercial Identification Numbers” and the correlation tables of the tariff fractions, the decrees and agreements being approximately more than 30.

These instruments must be updated within 180 days following the publication of this amendment in the Official Journal of the Federation.

Partial or total reproduction is authorized with mention of the author. All rights reserved by TLC Asociados, S.C. The content of this document does not constitute a particular consultation and therefore TLC Asociados, S.C., its team and its author, do not assume any responsibility of the interpretation or application that the reader could give to it.