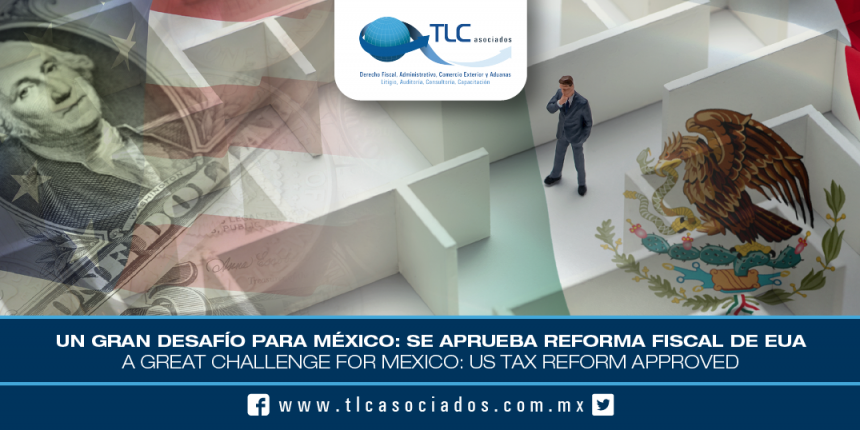 Last Saturday, December 2 the tax reform initiative was partially approved before the Senate of the United States of America (USA), with a vote of 51 votes in favor and 49 against, which brings with it different guiding axes ordered by the president of the United States, Donald Trump. One of the measures that would have greater relevance in the case of approving said proposal is to lower the rate of Corporate Income Tax (Income Tax Legal Person) in the US from a maximum rate of 35% (higher progressive rate) to a fixed rate of 20% (Senate proposed an entry into force as of 2019).

Meanwhile, the Mexican political agenda has focused on the approval of the Federal Revenue Act, the race to the presidential elections of 2018, the vacancies in the Attorney General’s Office, the Special Prosecutor’s Office for the attention of electoral crimes and the Anti-Corruption Prosecutor’s Office, but we must not lose sight of the fact that in case the Trump Government obtains the necessary votes (which already amount to 20 nominal votes), the US tax proposal would generate a situation that would transcend the cancellation of the North American Free Trade Agreement itself.

With respect to natural persons, the bill marks the following considerations:

Regarding companies, the bill considers:

The bill also repeals or modifies several credits and additional deductions for individuals and companies.

Some information that would be useful to know to resume a plan “C” to improve our national tax system immediately.

In particular, the income tax rate for its initials “ISR” in Mexico is 30%, so that the 20% offered by the Trump administration could generate a situation where the entrepreneurs who have their money in Mexico, will work in developing fiscal strategies, so that they could be taxed in the US, with a 10% lower rate, which would reduce revenue in Mexico (lower budget), and weaken the national currency.

A new single rate of 25% is also created for companies with direct flow (pass-through entities), as well as controls for high-income individuals to incorporate this type of companies so as to pay lower tax rates.

Repatriation of capital in the US Tax reform

Another incentive in the reform in process of approval in the United States for legal persons is that it allows a one-time tax rate for the repatriation of capital, for assets abroad of US companies, that is, 5% tax for illiquid assets. , and 12% tax for liquid assets.

A new single rate of 25% is also created for companies with direct flow (pass-through entities), as well as controls for high-income individuals to incorporate this type of company to pay lower tax rates.

On the other hand, they propose to significantly increase the amount of the standard deduction in the case of natural persons in the US, if we compare the current scenario in that country, we would find that it allows an Income Tax deduction of $ 12,700 dollars (approximately 234,950 pesos), but with the initiative up to $ 24,000 dollars (444,000 pesos approximately) could be deducted, a considerable increase.

It is not minor that in that juicy modern american reform it proposes to reduce the lines of Income Tax in the case of natural persons, that is to say, previously there were 7 lines with different tax rates considering their level of income, the new proposal only handles 4 large income levels and rates.

For greater clarity and to put the reform in numbers which is what finally counts, we provide some tables that will allow them to have more clear the impact of it.

US current scenario vs. US reform proposal

In an effort to manage the previous comparison of individuals we did the conversion of the previous table to Mexican pesos considering an average exchange rate of $ 18.50.

From the above we note that it is proposed to use a 12% tax for people who have an income between 0 and 1,665,000 pesos, an income that in Mexico would be considered high, since starting from the $ 392,841.97 pesos of annual income it would be taxed with tax rates above 30%.

Although the average income of an individual in the United States and Mexico is not comparable, observing the large gap that exists between them, marks the path we must analyze to incorporate fiscal policies that reduce the impact of the reform in the US or position Mexico as a competitive country.