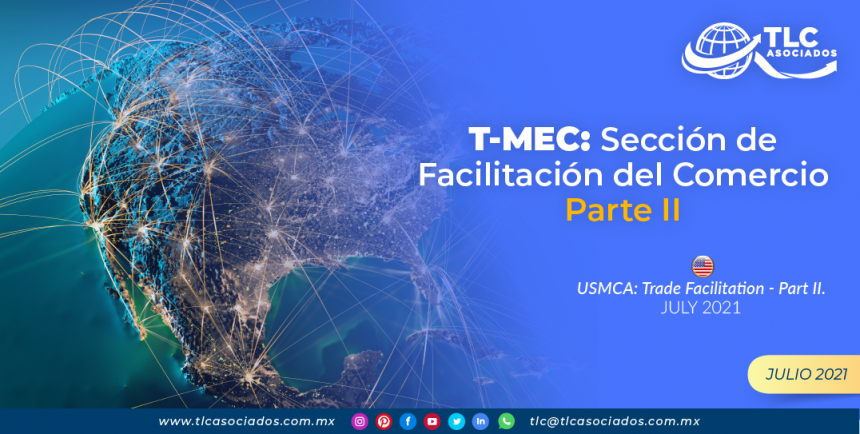 Continuing with the analysis of Section A of Chapter 7 of the USMCA, which addresses the topic of “Customs Administration and Trade Facilitation”, on this occasion we highlight the following points:

This precept mentions that in order to speed up the crossing of goods subject to customs procedures, the customs authorities will carry out audits after customs clearance to ensure compliance with customs regulations, taking into consideration risk management. Similar regulation in article 7, numeral 5 of the TFA.

Currently, the customs and tax regulations establish several procedures through which the customs authority may carry out post customs clearance audits of goods, some of which are as follows:

This provision requires the parties to maintain an Authorized Economic Operator program in accordance with the standards of the World Customs Organization. Similar regulation in article 7, numeral 7 of the TFA.

This certification has its antecedent on December 30, 2002 with the figure of the “Certified Company Registry”, a scheme incorporated in the Customs Law. Subsequently, the scheme changed its name to “Nuevo de Esquema de Empresas Certificadas” (New Certified Companies Scheme), by its initials “NEEC”.

Currently, the registration is known as Authorized Economic Operator under the company certification scheme, which is aligned with the World Customs Organization’s Framework of Standards to Secure and Facilitate Trade (SAFE), and the modalities contemplated are as follows:

It should be noted that some countries implement similar standards issued by each country’s customs administration, for example, in the supply chain security ISO 28000:2007, in the USA they implement the C-TPAT (Customs Trade Partnership Against Terrorism) and in Canada they implement the PIP (Partners in Protection), which are successful programs because they have a large number of registered companies, including mutual recognition with some governments at an international level.

As for the Authorized Economic Operator and Certified Commercial Partner modalities, SAT has 1,088 authorized companies that enjoy different administrative, legal and operational benefits, as long as they comply with the security profiles in the supply chain.

The customs tax regulations contemplate various schemes in the administrative area, including the alternative means of dispute resolution, to resolve challenges to acts or resolutions that cause prejudice to the foreign trade user, which may be filed before the tax authority or the Federal Court of Administrative Justice, as established by the law of the matter.

This precept establishes the incorporation of an administrative scheme for a customs office to make guidance consultations on customs procedures and regulations to the competent authority of the customs administration, either ex officio or at the request of an interested party.

Rule 87 of the general provisions of the treaty indicates that the request shall be made by electronic means by sending an e-mail to facilitacion@sat.gob.mx, together with the documentation related to the request. Currently, the Customs Service portal offers to resolve queries through the online chat or by means of the aforementioned e-mail.

In this context, there is a precedent on the project called “New Model of Customs Service” to provide a similar customs guidance service that aimed to strengthen collaboration between foreign trade users (passengers, exporters and importers, businessmen, chambers and associations) and the customs authority, also using the same email facilitacion@sat.gob.mx.

It is important to note that for the administrative guidance procedure, the regulations do not establish a deadline for the resolution of the consultation. However, there are other alternative procedures to submit queries to the customs authority. For example, importers and exporters have the possibility of submitting queries to the customs authorities on issues related to customs legislation, as long as they deal with real and concrete situations, which must be resolved within a period of 3 months.

The provision describes what the “traffic in transit” of goods and means of transport consists of and establishes that the formalities and controls should not be more burdensome than to identify the goods and ensure that the requirements were met. Similar regulation in Article 11 of the TFA.

In general terms, customs processing offers several facilities and establishes several obligations such as: filing a customs declaration; applying the generic code 00000000 to the goods, instead of the tariff item; using registered carriers; determining contributions and applying a higher import tax rate; complying with non-tariff measures; carrying out the transfer within the established times, among other requirements.

The provision indicates to adopt or maintain measures to sanction non-compliance with customs regulations and to apply them uniformly in their territories. In addition, to be imposed on the person who has committed the customs infraction, depending on the facts in proportion to the degree of seriousness of the non-compliance. Similar regulation in article 6, numeral 3 of the TFA.

Likewise, it is established that the parties must regulate that an administrative or minor error in the customs operation should not be considered as a customs infraction according to the regulations and may be corrected without sanctions unless it is a pattern of conduct.

In customs practice, the imposition of some infractions and penalties related to the non-compliance of accessory documentation is considered more serious than the non-compliance of the main documentation, for example, the penalty for inconsistencies in the value acknowledgment with a fine of $22,900 pesos, and the inconsistencies in the customs declaration with a fine of $2,010 pesos, pursuant to articles 184-B, section I and 185, section II of the Customs Law.

Additionally, there are cases in which the simple fact of correcting an error requires the payment of a penalty, for example, the fine of $2,010 pesos for the rectification of codes for companies with an IMMEX Program in accordance with rule 4.3.10 of the RGCE for 2020.

The precept states that measures should be adopted to dissuade customs officials from participating in actions that may result in private benefit, including economic ones.

In addition, it states that a mechanism must be established for foreign trade stakeholders to file complaints about improper or corrupt conduct by customs personnel, and timely follow-up must be given to the same.

This provision indicates the possibility of performing customs clearance without the intervention of a customs broker. On the other hand, it establishes that the parties shall not impose limitations on the number of ports or locations in which the customs broker may operate. This regulation is similar to article 10, paragraph 6 of the TFA.

This provision addresses the issue of cooperation for trade facilitation by promoting the efficient and effective processing of transactions. Similar regulation in Article 8 of the TFA.

It is also contemplated that customs administrations and other agencies carry out inspections in a coordinated manner in the same location for the purpose of clearance of goods, provided they comply with all the established requirements.

Article 144, section XXXIII of the Customs Law provides that the SHCP-SAT has the authority to “authorize that the clearance of goods may be done jointly with the customs authorities of other countries both in national territory and abroad, in accordance with the international treaties to which Mexico is a party, as well as to issue the rules that allow such joint clearance to operate in accordance with national legislation, international treaties and applicable inter-institutional agreements, including for the exercise of verification powers in juxtaposed customs and unified border points”. In this sense, some examples that have been regulated in the regulations are as follows:

This provision mentions the security measures on the use and protection of the information obtained from foreign trade actors. Similar regulation in article 12, numeral 5 of the TFA.

This provision contemplates cooperation to develop and implement trade facilitation initiatives between the parties. Similar regulation in article 12 of the TFA.

This provision establishes the creation of a Trade Facilitation Committee to address issues related to trade facilitation, which will be integrated by representatives from each country, and will meet within the year in which the USMCA is in force, and thereafter the meetings will be held as agreed by the parties.

The Secretariat of Economy informed through a press release dated May 18, 2021 that the Trade Facilitation Committee held its first working meeting.

Finally, the following table provides an indicative comparison of the topics addressed in current international trade agreements or treaties: