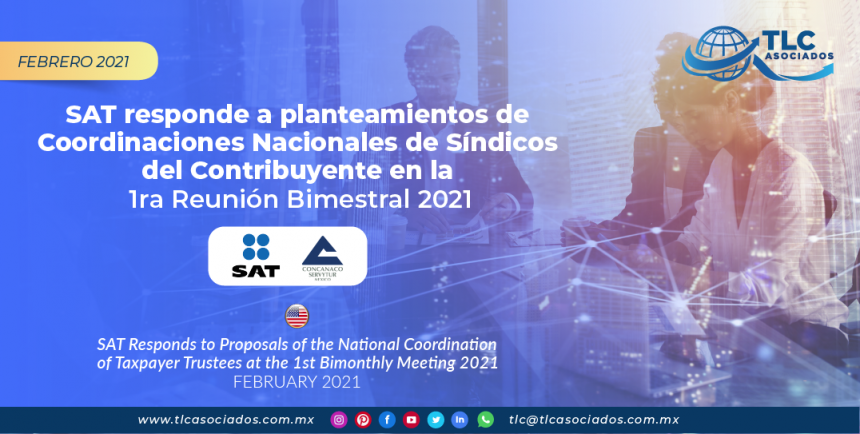 Here we present a summary of the responses on those issues on which the different coordinating bodies presented proposals at this first meeting.

As a result of the SARS-CoV-2 health contingency, the Tax Administration Service has been limited in the number of appointments available to taxpayers, which has caused problems for corporations that have expired their electronic signature in order to renew it, CONCANACO SERVYTUR suggested the possibility that the authority issue a system similar to the SAT ID for corporations.

The Tax Administration Service responded that appointments are released weekly for all procedures including among them, the renewal of the e.firma and that it is due to the epidemiological traffic light the reduction of staff for taxpayer service, in turn emphasizes that the validity of the e.firma is 4 years so it must be renewed before its expiration, also commented that they have been aware of accounts that make appointments in mass ways adapting the appointments portal and canceling or blocking appointments that come from this type of accounts.

Taxpayers have uncertainty with the modification of the decree of December 30, 2020, as to whether taxpayers that had requested the ISR or VAT incentive after or if at the time they did not choose to request the tax incentive could be benefited by such incentive and be able to request it now.

As for income tax, the notice must be filed no later than March 31 of the fiscal year in question; therefore, it is clear that the law establishes the specific term, per fiscal year, that the taxpayer must comply with in order to file the notice.

Regarding VAT, the deadline is within 30 calendar days following the entry into force of the Decree, the taxpayers that may opt for the benefit will be those that are only in the cases referred to in Article Twelve Second, second and third paragraphs of the Decree of tax incentives for the northern border region, related to those taxpayers that open a new branch or establishment in the northern border region and those that resume activities or update their tax obligations, no later than the 17th day of the month following the date of filing of the corresponding notice.

Taxpayers who are already beneficiaries of the VAT tax incentive under the Northern Border Region Tax Stimulus Decree, published in the DOF on December 31, 2018, due to the extension of such Decree until December 31, 2024, it is not necessary to file another notice to the SAT (provided they have not been terminated), since the same was filed at the time.

Tax advisors and taxpayers were uncertain as to whether or not they should report, since with respect to reportable schemes the authority must issue the parameters indicating the minimum amounts with respect to which the Reportable Schemes will not apply to be disclosed.

On February 2, 2021, the minimum amounts for which reportable schemes should not be reported were published in the Official Journal of the Federation, in the agreement it is stipulated as follows:

On the other hand, taxpayers and tax advisors had doubts as to whether all the provisions of Article 199 of the CFF, whether all the schemes should be reported or disclosed.

In the event that the tax advisor makes a plan, project, proposal, advice, etc., which is used to materialize a series of legal acts and that generates tax benefits in Mexico is not reportable, it must issue “Certificate of non-reportable scheme or of existence of legal impediment to disclose a reportable scheme.”

Source: Agreement determining the minimum amounts with respect to which the provisions of the Sole Chapter of the Sixth Title of the Federal Tax Code, entitled On the Disclosure of Reportable Schemes, shall not apply.

Last December 9, the amendment to Article 311 was approved and Chapter XII BIS was added with Articles 330-A; 330-B; 330-C; 330-D; 330-E; 330-F; 330-G; 330-H; 330-I; 330-J and 330-K of the Federal Labor Law. This amendment brought with it a series of doubts for taxpayers, since it does not clearly indicate the parameters or rules to determine how the determination of costs such as the payment of telecommunications and electricity services associated with this modality is made.

On the other hand, it should be noted that so far there is no pronouncement by the authority regarding the establishment of parameters or rules to determine how the allocation of costs derived from remote work will be carried out, the same case with the treatment that in tax matters will be granted, since there are no elements that allow to know how the allocation of the costs of such modality will operate.

The income provided by the employer, received by the workers to make the expenses derived from the remote work, these are considered as income for the worker for effects of the income tax law and therefore they must be registered in the CFDI of payroll.

The complete answers can be found in the corresponding Minutes, which will be published in the SAT’s website: