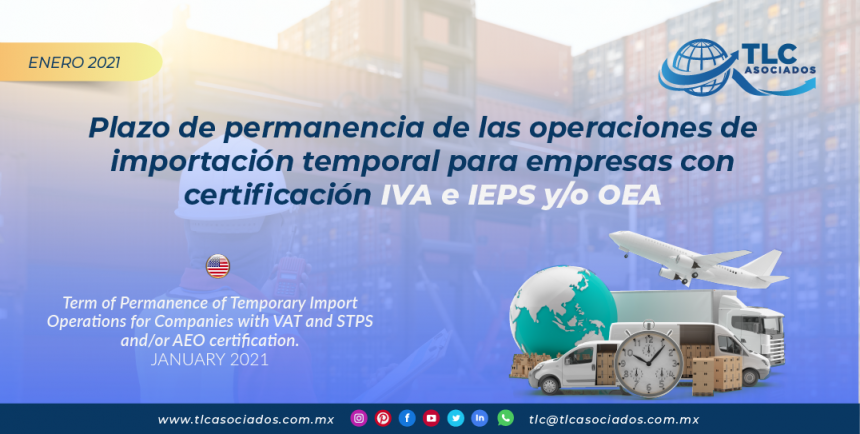 Do you have VAT & STPS certification under item A, AA, AAA and/or AEO (Authorized Economic Operator) certification? If so, it is important to consider the changes in the general rules of foreign trade for 2020 regarding the eliminated benefits related to the period of permanence of the goods in the country.

It is well known that as of June 20, 2016, companies with VAT & STPS certification in any of its items had the following deadlines to make the return and/or change of regime of temporary imports:

However, on July 24, 2020, the first amendment to the RGCE was published, where several benefits are eliminated, including the repeal of section VIII of rule 7.3.1 of the RGCE, which stated the following:

“7.3.1.- Companies that obtain the Registration in the Company Certification Scheme under the VAT & STPS modality, will have the following benefits:

VIII.  For the effects of Articles 108, Section I of the Law and 4, Section I, of the IMMEX Decree, the goods temporarily imported under its IMMEX Program, may remain in the national territory for up to 36 months.”

And adding rule 7.3.3, where in its section XXV it states the following:

“7.3.3.3.- Companies that are registered in the Company Certification Scheme, Authorized Economic Operator mode, in addition to the provisions of rule 7.3.1, sections II, III, IV and V, shall have the following facilities:

It is stated in the second transitory article that such modification will become effective as of the following renewal of its certification, that is to say, all those companies that had their certification in force will continue to have the aforementioned temporality as long as their VAT and STPS certification authorization is in force.

It is important to remember that most of the companies certified in VAT and STPS made the renewal of their certification during the last month of December, starting their new validity during the first working days of January 2021, and with this, losing the benefit mentioned before in section I of rule 7. 3.1 of the RGCE, retaking the temporality established in article 108 section I (18 months), and those companies that have the certification of companies in the modality of Authorized Economic Operator (AEO) retain the temporality of 36 months; as shown below

It is important to define the new time periods applicable to your company, taking into account the certifications in force, in order to mitigate the risk of having untimely balances and/or returns.