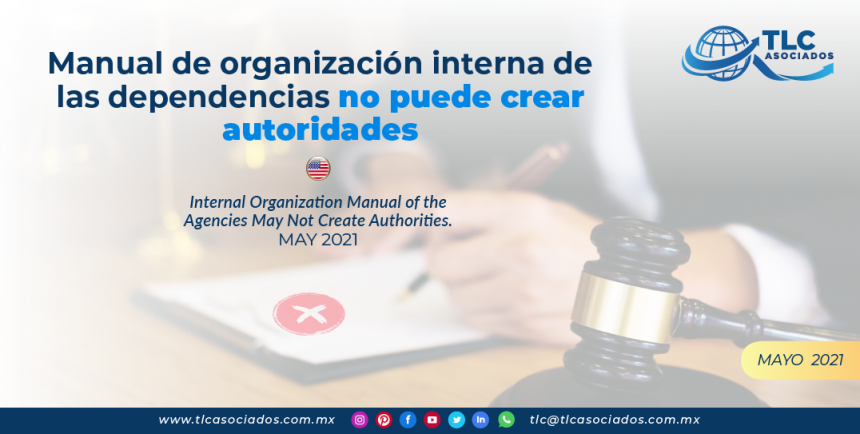 On December 2, 2020, in a session held remotely using technological tools, the Plenary Jurisdictional Chamber of the Superior Chamber of the Federal Court of Administrative Justice, by unanimous vote, agreed on the creation of the Jurisprudence by reiteration number VIII-J-SS-144, published in the Tribunal’s Journal, Eighth Epoch, Year V, Number 49, December 2020, whose heading states: “MANUAL OF INTERNAL ORGANIZATION OF THE DEPENDENCIES OF THE FEDERAL PUBLIC ADMINISTRATION. THROUGH THEM IT IS NOT LEGALLY POSSIBLE TO CREATE AUTHORITIES OR CONFER POWERS”.

The Court stated that Article 19 of the Organic Law of the Federal Public Administration empowers the heads of the agencies of the Federal Public Administration to issue, among others, organizational manuals with the purpose to serve as internal administrative support and/or dissemination regulations. Therefore, to conclude that an organizational manual could create and confer competence to an authority would violate the principle of legality, because the Secretary of the branch cannot create competence for any authority, since this is only possible with an act of the Congress of the Union or of the President of the Republic. Therefore, if an administrative authority is not expressly contemplated with its scope of powers in the internal regulations or in a law issued by the Congress of the Union, it must be concluded that such authority has no existence or legal competence whatsoever, since it is common law that an authority in our legal system must be created and obtain its powers through a formal and/or materially legislative act, issued by the Congress of the Union through the creation of laws or by an act of the Head of the Federal Executive Power in use of the regulatory power.

This is considered in this way because it is clear that in the creation of a law some authority is given the power and competence to perform certain acts, so it is clear that such competence can in no way be established in an ordinance other than a law emanating from Congress or the head of the Executive, and less in an organizational manual of an agency, because this as its name indicates is only a guide on the organization of that agency that cannot establish any kind of competence to the respective authority to perform any act that is not expressly provided for in the law.

However, we have seen that as a result of the advance of technology some authorities have decided to inform of some acts of their competence through the use of social networks, which is neither correct nor legal, since the official channels of communication and publicity of the acts are for that purpose, since it is clear that such means are not within the reach of all people, therefore, the creation of the law is the only legal means through which competence can be conferred to any authority or establish obligations to the taxpayers.