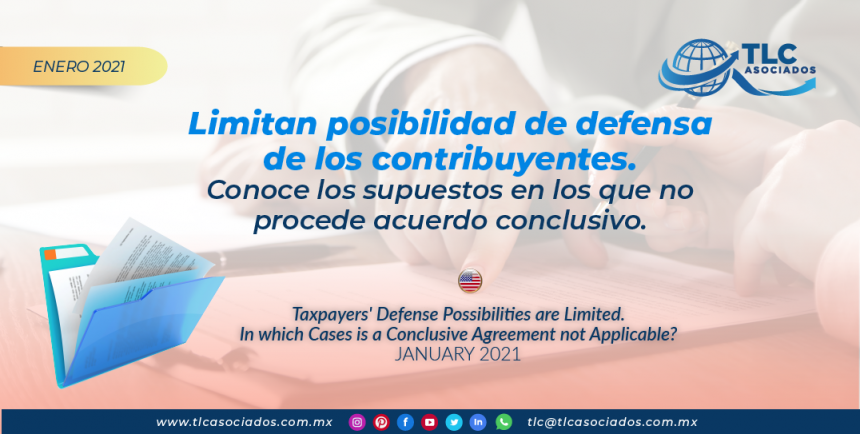 Since January 1, 2021, the restrictions to promote a request for a Conclusive Agreement before PRODECON became effective.

What is the Conclusive Agreement?

It is an alternative dispute resolution mechanism, which aims to ensure that taxpayers who comply with the established requirements regularize their tax situation and resolve their differences with the tax authorities through an alternative solution without the need to go before a judge.

When can I request the Conclusive Agreement as of the amendment to article 69-C second paragraph of the Federal Tax Code?

It is very important to know that, since January 1, 2021, the taxpayer has a term of 20 business days from the date of the final assessment or notification of the official notice of observations or the provisional resolution, as the case may be, to request the conclusive agreement.

In which cases is it NOT appropriate to request a Conclusive Agreement?

I. Regarding the powers of verification that are exercised to verify the validity of the refund of balances in favor or payment of the undue amount.

II. Regarding the exercise of powers of verification through third parties in terms of sections II, III or IX of article 42 of the Federal Fiscal Code.

III. Regarding acts derived from the compliance with resolutions or sentences.

IV. When the period of twenty days following that in which the final report has been issued, the notice of observations or the provisional resolution, as the case may be, has elapsed.

What you should take into account when requesting a Conclusive Agreement as of the reform to the Federal Tax Code.

These changes were published on December 8, 2020 in the Official Journal of the Federation and Article 69-C of the Federal Tax Code was amended, specifically the second paragraph and the third paragraph, sections I, II, III, IV and V were added.