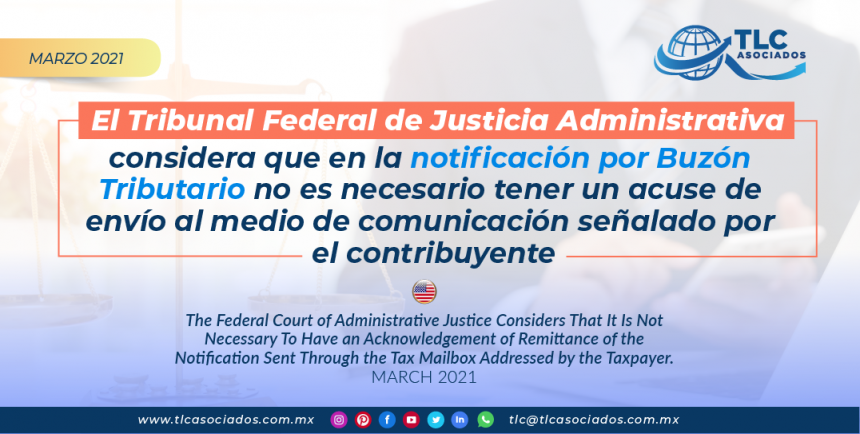 It is important to remember that in accordance with the provisions of Articles 17-k and 134, section I of the Federal Fiscal Code, the authority may notify taxpayers through the Tax Mailbox regarding administrative acts or resolutions.

What is the procedure for the notification by Tax Mailbox?

What was the criterion VIII-P-SS-441 issued by the Plenary of the Superior Chamber of the Federal Court of Administrative Justice published in the October 2020 edition of the Court’s Journal?

In the event that the taxpayer denies having received the electronic notice in any of the chosen mechanisms, it does not oblige the authority to exhibit an acknowledgement of receipt of the alert sent by e-mail, since notifications by tax mailbox and those made by any other means of electronic communication must be differentiated, since, in the case of notifications by tax mailbox, the acknowledgement generated on the knowledge of the act by the taxpayer is until the moment he accesses his tax mailbox and opens the document, which has legal relevance in the sphere of the governed, since it establishes the moment in which he/she is aware of the act and the terms to appeal it begin to be computed, a situation that does not apply from the pending notification notice, since in this case the definitive act is not being sent, which is the reason why the authority is required to exhibit the mentioned acknowledgement in the electronic notifications by other means.

In our judgment, criterion VIII-P-SS-441 issued by the Plenary of the Superior Chamber of the Federal Court of Administrative Justice is not applicable to notifications made on the 4th day in which the authority must prove that it has sent the notice.

Thus, in those notifications in which the taxpayer does not access the Tax Mailbox within 3 days after the authority sent the “notice”, being understood as made on the 4th day of having been sent and not from the day the taxpayer enters his Tax Mailbox, the authority would be obliged to prove in the defense that it sent the notice before the taxpayer’s refusal to have received it.

The above, in order to grant legal certainty to the taxpayers regarding the notifications made by the authority since, in the case of e-mails, it happens regularly that, due to failures or updates in systems, the e-mails go to unwanted e-mails and/or spam, therefore, the authority should prove that the “notice” was indeed sent by mail.

It is important to consider that criterion VIII-P-SS-441 only constitutes a precedent, so its application is not mandatory.