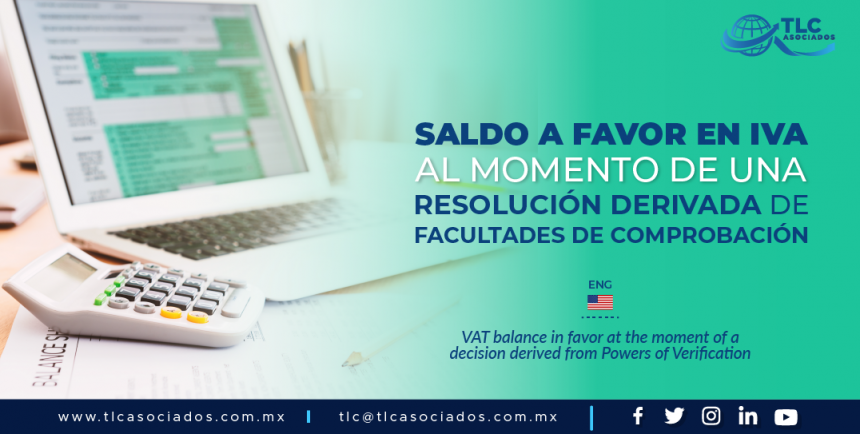 On September 27, 2019, the Taxpayer Defense Attorney’s Office (PRODECON), acting as ombudsman for taxpayers, and exercising the attribution conferred by article 5, section II of its Organic Law, issued jurisdictional criterion 72/2019, which originated from the sentence issued by the First Chamber specialized in Foreign Trade of the Federal Court of Administrative Justice.

It is noteworthy that the Jurisdictional Body considered that although, as a general rule, the taxpayer is credited with the balance in favor of the determined VAT, the truth is that when the tax authority reviews said contribution for verification purposes and the taxpayer submits documentation showing that he has a balance in favor, it must include in its resolution the amount of the favorable balance of said non-accredited tax when determining the tax credits to be charged to the reviewed taxpayer. This is due to the fact that the taxpayer’s right to carry out this accreditation under the premise that it was not carried out in advance could be considered precluded.

Nevertheless, it does not mean that the controlling authority is bound in all cases to accredit in an informal and indiscriminate manner the balances in favor of VAT that taxpayers may have, rather that it is limited to the cases in which it displays its faculties of verification and the taxpayer has informed it of the existence of said balance in favor and exhibited the respective documentation, as well as that the reviewing authority has verified the origin and origin of such balance in favor.

In conclusion, it is imperative to have full knowledge of their tax returns, as well as of the balances in favor that may result. This is done in order to be able to make those balances effective at the time they are subject to verification powers, so that they may be considered in the determination of the tax credit.

“In TLC Asociados, we develop a multidisciplinary team of experts in audits and risk analysis for consulting, implementing strategies and complying with foreign trade operations”