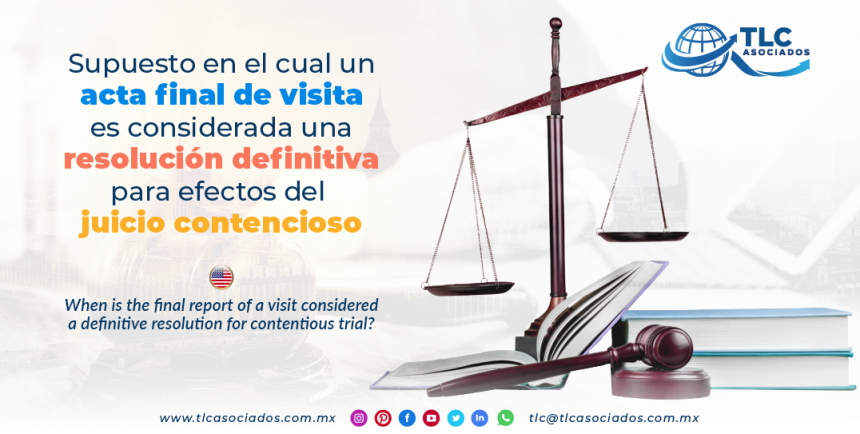 Recently, the Full House of the Upper Chamber of the Federal Court of Administrative Justice published in their Journal Number 37, Eight Term, Year IV, p. 49, thesis number VIII-P-SS368, named “INJURY TRIAL IN THE EVENT THAT THE FINAL REPORT OF THE HOME VISIT CONSTITUTES A FAVORABLE FINAL DECISION, FOR THE PURPOSE OF ITS BEING CHALLENGED BY THE AUTHORITY”. It indicates that, from the beginning, the Organic Law from the Federal Court of Administrative Justice demands for the origin of the detrimental trial for the favorable administrative resolution to be considered as definitive. This is updated when the administrative report defines the legal situation of the governed or provides legal certainty to the last one regarding the definite result from the actions of the authority in an administrative process.

In case law 2a./J. 16/96, the Second Chamber of the National Supreme Court of Justice determined that with procedures of tax home visits regulated by articles 42, section III and 46 from the Federal Tax Code, the final report, issued by those who carry out the visit, does not represent a definitive resolution for purposes of its challenge in the contentious-administrative trial, but can only serve as a motivation for the final resolution issued by the liquidating authority, which is not obliged to make its determination in the same terms as the visitors.

However, the criterion refers to the contentious-administrative trial initiated by the individual, so it is not exactly applicable in the case of the detrimental trial. This is promoted by the authority that goes to the jurisdictional body in order to have an administrative report that produces a legal injury to the public interest annulled.

Consequently, a final report issued as a result from a home visit on tax matters indicates that the visitors did not limit themselves to analyze the documents of evidence provided during the visit; they issued the corresponding detailed report, but they also evaluated the scope of said documents and based on this, they determined that there were no irregularities of any kind, granting themselves the authority granted only to the liquidating authority, which serves as a precedent to terminate, in advance, the home visit without having issued a determining resolution; then, such report is not merely instrumental, since at that time, the tax situation of the visited taxpayer was determined and he was given legal certainty on the result of his visit, meaning that there was no irregularity. This report contains the final product of the will of the administrative authority and can be considered a final decision. A contrary interpretation would allow the legality of this type of administrative report not to be subject to judicial review, even though it defines a legal situation favorable to the taxpayer, which would be detrimental to the collective interest

In other words, this approach clearly defines that, in the case of a challenge to a final report of home visit, the rules are different depending on whether the individual or the authority is bringing the contentious-administrative action. While for the latter, such report would not be definitive and could only serve as a reason for the final decision issued by the liquidating authority, and therefore makes the authority that goes to the detrimental trial void an administrative report that produces a legal injury to the public interest. A final resolution could be issued for the purposes of such a trial, when in a final report drawn up under the protection of a home visit, it is clear that the visitors did not limit themselves to analyzing the documentation provided during the visit, but also assessed the scope of such documents and, based on this, determined that there were no irregularities whatsoever, granting themselves powers that corresponded solely to the liquidating authority, which served as a precedent for its termination, in advance, the domiciliary visit without a determining resolution, then such report would not be an instrumental one, because at that moment the fiscal situation of the visited taxpayer was determined and he was given legal certainty on the result of his visit, in the sense that no irregularity existed; therefore, such report contains the will of the administrative authority and can be considered a definitive resolution.

According to the Federal Court of Administrative Justice’s decision, the final report of a home visit can be considered a final resolution or not, depending on who is acting in the contentious process. As we have seen, while for the individual it would not be a definitive report, since it is not the last will of the auditing authority, but rather it must by law emit a liquidation resolution based on said report, for the authority it is considered a definitive resolution that could be fought by means of a detrimental trial, in the case that it harms the fiscal interest, since in it is expressed the decision of the auditors (and not of the authority itself) in the sense that there were no irregularities in charge of the visited party, constituting an report that is subject to jurisdictional control.

Notwithstanding the above, Case Law 2a./J. 16/96 issued by the Second Chamber of the National Supreme Court of Justice, published in the Federal Judicial Newsletter and its Journal, volume III, April 1996, under the heading “HOME VISIT, THE FINAL REPORT OR THE DOCUMENT IN WHICH THE VISITORS DETERMINE THE PROBABLE LEGAL CONSEQUENCES OF THE FACTS OR OMISSIONS THAT THEY KNEW ABOUT DURING THE VISIT, DOES NOT CONSTITUTE A FINAL FISCAL RESOLUTION AND AGAINST IT THERE IS NO NULLITY TRIAL BEFORE THE FEDERAL FISCAL COURT”; as already mentioned, this standard is only applicable to the contentious-administrative trial initiated by the individual, which is not applicable to the detrimental trial that the fiscal authority or the person in charge of its legal defense files when it considers that such final report, which contains a legal situation favorable to the taxpayer, is detrimental to the collective interest.