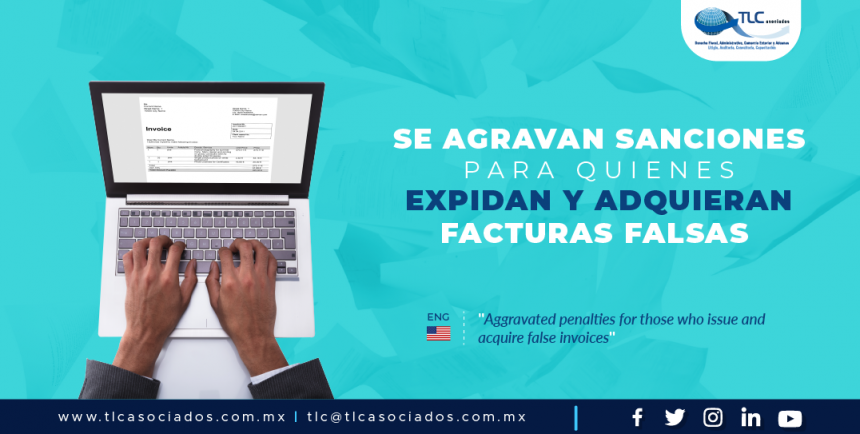 For some time now, the authority has needed a document that supports the operations carried out between individuals, such as the purchase of merchandise, the provision of a service or merchandise lease.

For the Tax Administration Service (SAT, for its Spanish acronym) the valid document is an invoice or currently known as CFDI (electronic invoice), this document has wrongfuly turned into a product, having the unfortunate tendency that legally constituted companies obtain income by creating invoice vouchers that do not cover anything real.

With the new update to the CFF (Federal Fiscal Code) we find that the penalties for these actions change as follows:

Before this publication, these activities were already penalized, but the wording made many of those involved in this activity win in court, this due to the way in which the norm could be interpreted.

Now the authority separates the cases on acquisition, issuance and disposal, closing in a way the opportunity for those involved to be unpunished.

These 3 cases had the same minimum penalty of 3 months, now we see that those who obtain the CFDI (Digital Invoice) continue to have the same penalty, however, those who generate or sell the invoice will have a minimum stay of 3 years in prison.

It is recommended that all taxpayers establish a supplier review strategy, this can be done by analyzing the blacklist published by the SAT on its online portal, specifically the reason for article 69-B of the CFF (Federal Fiscal Code) to know which taxpayers are in a supposed simulation of operations or which are already considered “invoice merchants”.

The fact that someone obtains an invoice from these suppliers does not mean that he was participant in a simulated operation, so there is the possibility of clarifying to the authority that this CFDI (Digital invoice) does cover a real situation and thus not fall into any of the cases for these penalties that were published.