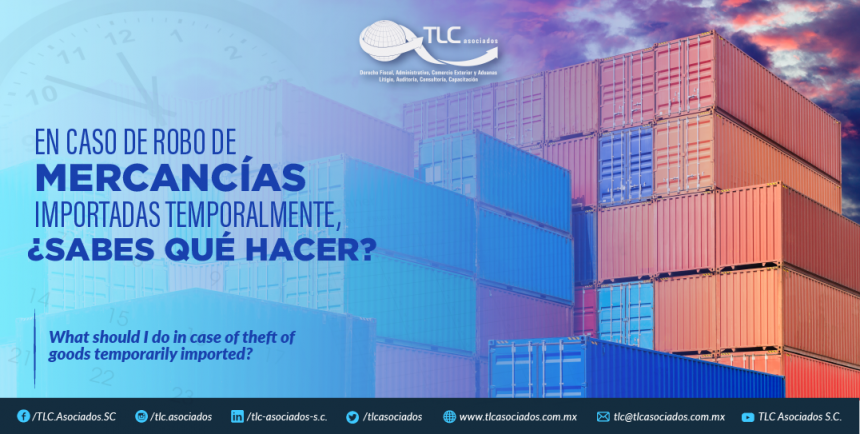 376 – En caso de robo de mercancías importadas temporalmente, ¿sabes qué hacer?/ What should I do in case of theft of goods temporarily imported?

In accordance with the stipulations of rule 2.5.7 of the current General Regulations of Foreign Trade (GRFT); in case the company is victim of a theft of goods imported through one of the following regimes: temporary import, tax warehouse, transit of goods and production, transformation or repair in an in-bond facility; the company is forced to pay the General Import Tax (GIT), the countervailing duties or/and the corresponding contributions, in addition to the recording of minutes before the corresponding public prosecutor about the events by detailing losses experienced, as well as validating the compliance of the applicable non-tariff regulations and restrictions and the NOM’s (standards), within the 30 days after the recording of the minutes aforementioned.

In case the stolen goods have any tariff preference in accordance with the commercial treaties or free trade agreements, this tariff preference may be applied once the payment of the General Import Tax is determined.

For the purposes of validating the stipulations of the first paragraph, you must process, before the customs office, a declaration that validates the compliance of the obligations aforementioned regarding the stolen goods by using any code related with Appendix 2 of Annex 22 of the current General Regulations of Foreign Trade, as well as the customs declaration codes described in Appendix 8 of the same Annex.

In addition, for the purposes of validating the impossibility of the return of the goods, the declaration number used for the entry of the goods into national territory shall be transmitted in the clearance field of the declaration, and the minutes recorded before the public prosecutor shall be added as an e-document.

In case the automated selection mechanism determines to implement the customs examination, it must be performed for documentary purposes.

The part aforementioned is also applicable in case of theft of containers temporarily imported according to section I of rule 3.1.26 of the GRFT, in which, in order to exempt the obligation to return them, you must present a declaration that validates the definitive import of the stolen containers within 30 days after the expiration of this return before the customs office where these containers were imported, in addition, you must present the minutes recorded before the public prosecutor and pay the GIT and the rest of the corresponding contributions, which are current up to the payment date, considering the value established in the import invoice as a tax basis.

In case of a non-compliance of these parts aforementioned within the period established by the customs provisions to perform the return of the goods, the Audit Authority may determine that you are incurring the infringement and penalty established regarding the return of the goods, in other words, when you are not complying with the return of the goods within the period established, it shall be assumed that these goods are illegally found in the country, for having concluded the temporary import regime by which these goods were allocated, committing the infringements regarding imports or exports by any individual who introduces goods into the country or extracts goods from the country, omitting the partial or total payment of the foreign trade taxes and, as the case may be, the countervailing duties that must be covered.

Committing the penalty established by section I and IX of article 178 of the Customs Law, as the case may be:

IX. Equivalent penalty to the penalty established by sections I, II, III or IV of this article, as the case may be, or of 70% to 100% of the commercial value of the goods when they are exempted…”.

It should be mentioned that certain infringements described by article 182 of the Customs Law, sanctioned in article 183 of the same Law, may be applicable as well.