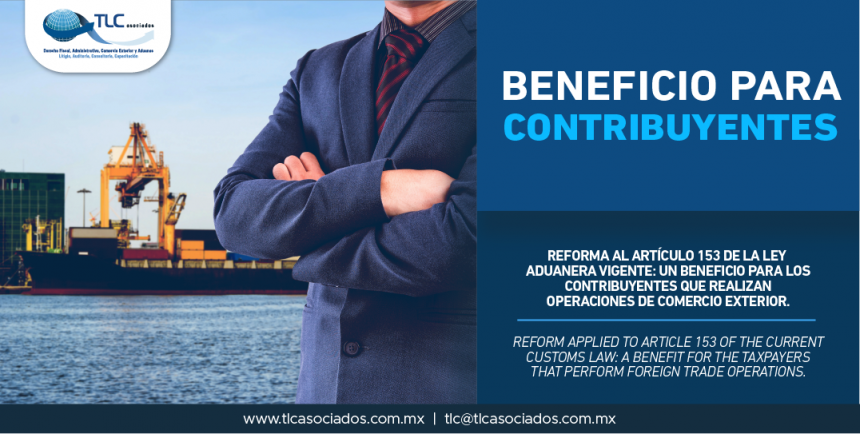 A few days prior to the entry into force of the Decree by which several provisions of Customs Law are reformed, added, repealed published on June 25th, 2018, on the Official Journal of the Federation, now, it seems necessary to keep analyzing the changes that might represent a benefit for the foreign trade agents.

In this manner, one of the benefits provided by this reform to the Customs Law, for the taxpayers that perform foreign trade operations and do not have an export program authorized by the Economy Department, is included in article 153 of the Customs Law.

Prior to the reform published on June 25th, 2018, in the last paragraph of article 153 of the Customs Law, which is an article useful as a basis of the uprising of the Administrative Procedure in terms of Customs Matters, an exclusive benefit was included for the maquila industries and companies with an export program authorized by the Economy Department. This program represents economic savings and celerity to recover the goods that are your property by allowing the irregularities detected by the customs authority and paying the differences regarding taxation to foreign trade in a period of ten working days.

In that case, the taxpayers that perform foreign trade operations without a program authorized by the Economy Department were not subject to the same consequences, since article 153 of the Customs Law had no established benefits for them when this case was updated.

In this context, in the reform applied to article 153 of the Customs Law published on June 25th, 2018, a last paragraph is added, and it establishes that:

For the purposes of section IV of article 151 of the Customs Law, on the occasion of the customs examination or the verification of the goods in by transport, when undeclared or extra goods are detected by more than 10% of the total value declared in the customs documentation that safeguards the goods, as long as one of the rest of the cases regarding preventive seizure described in article 151 of the Law remains outdated, when, within the ten days after the notification of the certificate described by article 150 of the Law, the present applicant described in the document in which his/her consent is established within the content of the certificate, the customs authority that would have proceeded with the procedure shall be able to issue a preliminary resolution in which they shall determine the omitted countervailing contributions and quotas, as well as the proceeding sanctions. When the applicant, in a period of five days starting from the date when the notification of the preliminary resolution comes into effect, validates the payment of the corresponding contributions, accessories and fines, the customs authority shall command the return of the goods.

Therefore, the possibility is provided to all foreign trade agents without a program authorized by the Economy Department to be protected under this benefit and recover the goods that are their property in a shorter period of time, in case of having an Administrative Procedure in terms of Customs Matters against them derived from the grounds for seizure established in article 151, section IV of the Customs Law.