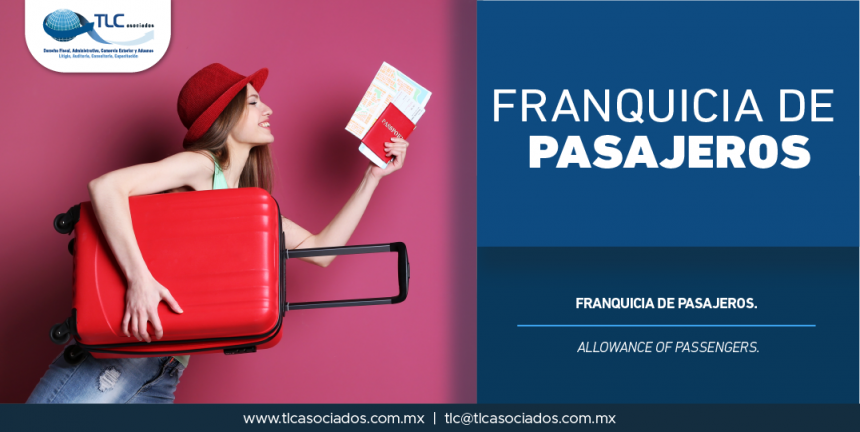 As a result of the last modification of the General regulations of Foreign Trade (GRFT) that were published on the Official Journal of the Federation, the third paragraph of rule 3.2.3 of the GRFT is renovated, where the allowance, permitted to enter to national territory by a passenger by land or air, is described.

For this purpose, it is imperative to understand the concept of passenger established in rule 3.2.1 of the GRFT, which establishes the following part:

“All individuals that introduce foreign trade goods into the country once they arrive, or once they cross the border or frontier zone to the rest of the national territory, shall be considered as passengers”.

Now, it is emphasized that the inhabitants located at the border or frontier zone are not considered as passengers. Once this point is clarified, according to the reform of the third paragraph of rule 3.2.3 of the GRFT, the passenger’s baggage is not part of his/her allowance, however, the passenger must carry his/herbaggage at all times.

In addition, the passenger is allowed to introduce goods, into national territory, with the following values:

I.When the passenger enters the country by land: goods valued at 300 US Dollars, or their equivalent in national or foreign currency.

II.When the passenger enters the country by air or sea: goods valued at 500 US Dollars or their equivalent in national or foreign currency.

The value of the goods that are part of the passenger’s allowance must be validated with supporting documentation by showing the commercial value of these goods; introducing alcoholic beverages, manufactured tobaccos or automotive fuel, under the scheme of their allowance, is prohibited. In addition, it should be mentioned that the allowances of the members of a single family may be gathered in case they arrive simultaneously into national territory.

Is is absolutely imperative to identify the authorized allowance of every single passenger at all times, since in case this passenger exceeds the authorized amount, the penalty established in article 178, section I, second paragraph of the Customs Law, shall be applied, which establishes as written: “When the infringement described in this section is committed by passengers, a fine from 80% to 120% of the commercial value of the goods shall be enforced”.