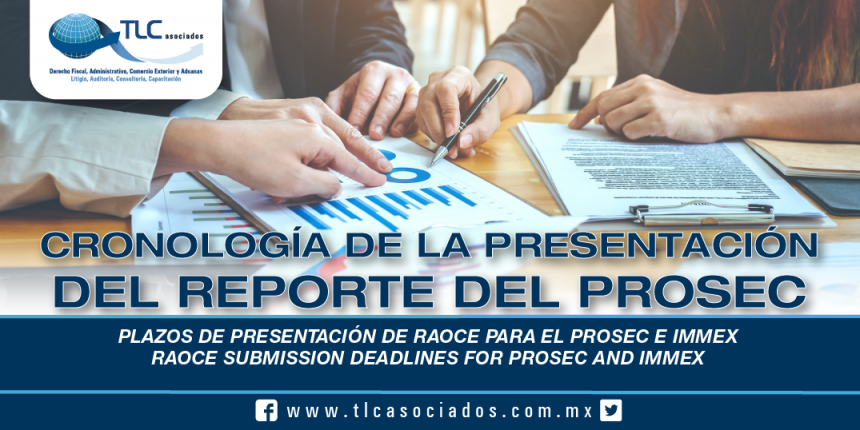 Do you know the legally established deadline to comply with the Annual Foreign Trade Operations Report (RAOCE) for both Sectorial Promotion Programs (PROSEC), and for the Manufacturing, Maquiladora and Export Services Industries (IMMEX)?

In TLC Asociados we explain to you about the chronology regarding the presentation in the correct time and manner.

On August 2, 2002, the Official Federal Gazette (OFG) announced the “Decree establishing various Sectoral Promotion Programs“, to begin the day following its publication, which has suffered various modifications being the last on October 17, 2017.

It is important to consider that more than 15 years have passed since the aforementioned PROSEC publication, and over time the format and presentation of the annual report have been modified in order to standardize them with other statements.

In particular, Article 8 of the PROSEC Decree provides that producers must submit an annual report to the Secretariat of Finance and Public Credit (SHCP) of their operations carried out under the program corresponding to the previous fiscal year no later than the last working day of the month of April, according to the format and requirements established by the SHCP.

In the beginning, companies authorized with PROSEC, even if they had another development program registered, independently presented the “Annual Report on Foreign Trade Operations, Sector Promotion Programs (PROSEC)”.

Next, a transcendental antecedent is the publication of the OFG of March 17, 2003 where the Annual Report of the PROSEC is included in the “Annual Foreign Trade Operations Report” and its filling instructions in accordance with Annex 1 of the Rules of General Character in Foreign Trade Matters for 2002[1]. In a special manner

III. Changing both reports regarding the date of presentation.-

Additionally, on April 25, 2003, the “Annual Foreign Trade Operations Report” changes to indicate that: “This report must be submitted through the annual reports module PITEX, MAQUILA, ALTEX, ECEX and / or PROSEC via Internet no later than May 31 of the immediately following year to which the information corresponds, at the following address: www.economia.gob.mx according to the following procedure:”[2] This publication is extremely important because as of this date it is extended to the month of May of each year the presentation of the annual report.

In 2011, the Federal Government implemented electronic procedures for the presentation of administrative procedures in order to facilitate and simplify foreign trade operations, for which the “Decree establishing the Mexican Digital Foreign Trade Window”[3] was announced. For this reason, they migrated the Annual Report of Foreign Trade Operations from the Internet website of the Secretariat of Economy to the digital window.

Specifically, the most recent format and instructions for filling out the Annual Foreign Trade Operations Report with the identification code “SE-FO-03-027”[4], was published in the Official Federal Gazette on May 31, 2016 by means of the Agreement by which the forms that should be used to carry out procedures before the Secretariat of Economy are disclosed.

The above, becomes relevant derived from the statement that was broadcast directly from the institutional email of the Secretariat of Economy with the account name comunicados.dgce@economía.gob.mx, which to the letter indicates: 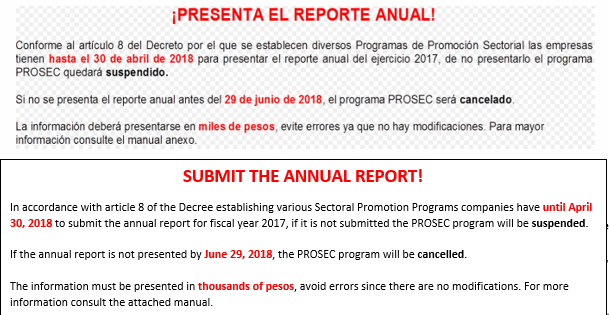 From the observation of the referred publications, the declaration of the “Annual Foreign Trade Operations Report”, in particular the report of the Sectoral Promotion Programs was matched with other reports, only to extend the presentation date of the report going from April to Month of May.

For this reason, it is important that the administrative authorities consider other benefits that have been regulated in other official provisions to facilitate and unify the presentation of procedures before the Secretariat of Economy in order to provide greater legal certainty to foreign trade actors.

Nonetheless, the foregoing, TLC Asociados suggests submitting the RAOCE on the date indicated in the email sent by said Secretariat, with the purpose of avoiding any situation that may harm the operation of the company, as long as the authority does not modify its actions and considers the benefit that we refer to in the preceding paragraph.