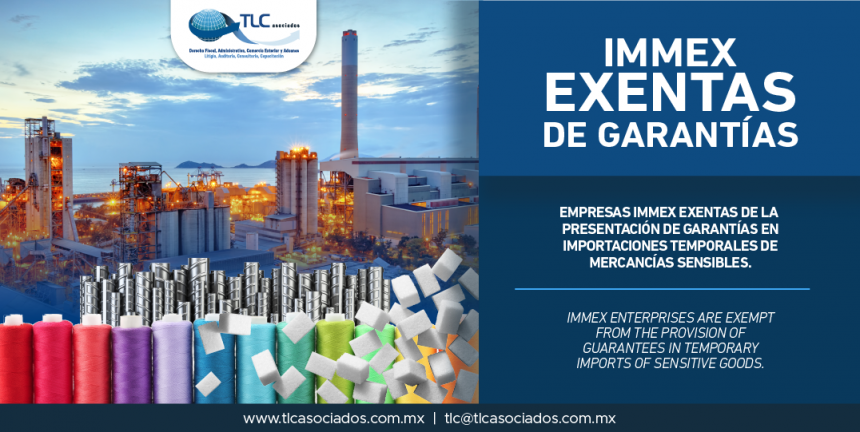 On October 25th, 2018, the preliminary project was published on the Federal Regulatory Improvement Commission’s website. This project reforms the “Decree to encourage the manufacturing, maquila, and export services industry”to integrate the obligation of implementing the guarantee procedure during temporary imports of sensitive goods in accordance with the Annex II of IMMEX Decree and Annex 3.3.2 of the Rules and Standards of the Economy Department, as well as defining and integrating the concept of sensitive goods, and removing the benefits for certified companies, among other changes.

In addition, the preliminary project was announced, which reforms the “Agreement that modifies the diverse by which the Economy Department establishes regulations and standards of general nature in terms of Foreign Trade” that provides the exceptions for the compliance of guarantee procedures for specific companies that comply with the requirements described hereunder, which are pending to be published by official media. Nevertheless, both publications still pending to be published in the Official Journal of the Federation.

In these circumstances, Rule 3.3.1 of the Regulations and Standards of the Economy Department is reformed in order to provide IMMEX enterprises with the benefit, which states that there is no need to comply with the implementation of the guarantees procedure, as long as the following points are stated in the assumption:

“I. If they comply with one of the following cases:

III. In case these enterprises are direct suppliers of the companies mentioned in section II, and these companies recognize them as they are.

VII. In case these enterprises  have been associated with any chamber during the last 3 years, in accordance with the Law of Business Chambers and their Confederations, or they have had, at least, 250 workers during the last 6 months.

VIII. In case these enterprises have been associated with any exporting companies association, during the last 3 years, with the authorization of SAT (the Mexican Tax Administration Service) to provide electronic data pre-validation services , in terms of article 16-A of the Customs Law, which shall be associated with, at least, 350 companies mentioned in subsection C) of section I, and they have had, at least, 250 workers during the last 6 months.

For the purposes of the current section, it is considered that several companies belong to a single group, when the 51% or a higher percentage of their shares with voting rights granted to all companies is considered as direct or indirect property (or both) of the same natural or legal person living in national or foreign territory.

The parts previously mentioned shall not be applied when the company is a recycling, garbage collection, storage, or merchandise distribution company, without the performance, by the same company or group, of a production process that might produce garbage, with the exception of the case when the garbage is transferred by the companies described from section I to IV.

The Economy Department shall be able to perform consultancies to the corresponding authorities or entities described in sections VII and VIII in order to verify the compliance of the requirements aforementioned by the companies.

The companies must submit the information and documentation, to the corresponding Department, that validates the compliance of one of the cases, described in the second paragraph, by the companies.

First. – The current Agreement shall come into force on the day after its publication in the Mexican Official Journal of the Federation.

Second.- The certified companies that submit the information, described in the last paragraph of Rule 3.3.1, shall be authorized by the Economy Department to import the amount that they might use during a month according to their temporary imports historical operations, by the time the information was verified by this Department.”

Concerning this paragraph, the modifications of this preliminary project are related directly to the regulations of IMMEX Decree, therefore, once they are published in the Official Journal of the Federation, it shall come into force immediately.

It is relevant for IMMEX enterprises to import sensitive goods from Annex II, IMMEX Decree, and Annex 3.3.2 of the Rules and Standards of the Economy Department, to analyze and assess the cases of derogation established by this instrument in order to enjoy the exclusive privilege of not being forced to apply the guarantee procedures, which probably do not provide maquila companies with benefits during their customs operations.

Additionally, in terms of the second “temporary”, the certified companies, that submit the information and documentation to the Economy Department, shall be examined by the Economy Department in order to verify they comply with the requirements, therefore, this Department shall be able to authorize temporarily a quota or amount in accordance with the average of the monthly operations.