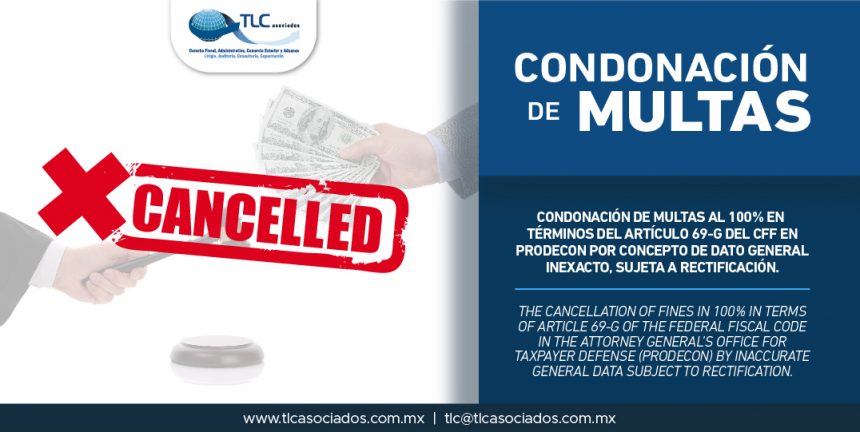 In accordance with article 69-G of the Federal Fiscal Code (CFF), the taxpayer that signs, for the first time, a conclusive agreement in the presence of the Attorney General’s Office for Taxpayer Defense (PRODECON), shall be given with the right, for one time only, to cancel the 100% of the fines extended to this taxpayer, during the audit procedure.

As a reference of the part previously mentioned, the corresponding article is transcribed hereunder:

“Article 69-G. The taxpayer that signs a conclusive agreement shall be given with the right, for one time only, to cancel the 100% of the fines; during the second and further signatures, the cancellation of penalties, in terms and under the cases described in article 17 of the Federal Law of the Rights of the Taxpayer, shall be applied. The fiscal authorities must consider the magnitudes of the conclusive agreement in order to issue the pertinent decision, as the case may be. The cancellation mentioned in this article shall not provide the right to reimbursement or compensation”.

In this context, according to the legal precept previously transcribed, it is established that in order to have access to the benefits of cancelling the 100% of fines, the only restriction or condition concerns complying with the following conditions:

In this vein, all taxpayers that attend to PRODECON, in the terms aforementioned, shall be given with the right of cancelling the 100% of corresponding fines, without considering the motives or reasons why these fines were applied.

Nevertheless, the Audit Decentralized Administration of Foreign Trade of the North Pacific (ADACE) has recently determined the taxes in the conclusive agreements, in which the cancellation of the 100% of fines is involved. Concerning the taxes by Inaccurate General Data in terms of article 184, section I of the Customs Law, in order to validate the benefits aforementioned, the taxpayers must rectify the requisitions, in which the infringement was committed.

In other words, ADACE has established to add a condition, in order to have access to the benefits of cancelling fines, to the stipulated part of article 69-G of the Official Journal of the Federal Fiscal Code,when these fines are applied by Inaccurate General Data, which is an inappropriate case and an abuse of authority against the taxpayers.

The abusive measurement of ADACE, in other words, the need for the requisitions to be rectified, in order to apply the cancellation of fines, is endorsed by the authority, in an incorrect manner and without a bonding, in Rule 6.1.3., of the current General Regulations of Foreign Trade (GRFT), which is transcribed hereunder:

“Requisitions Rectification in the conclusive agreement

6.1.3.For the purposes of article 89, penultimate paragraph of the Law, the taxpayers that are subject to exercise of the verification attributions described in article 42, sections II, III, and IX of the Federal Fiscal Code, may rectify the inaccurate data written in their requisitions, as long as a conclusive agreement has been requested and they comply with the stipulated parts described in the procedure file 101/LA”.

For the purposes of the precept previously transcribed, the following points should be noted:

Under the conditions previously mentioned, it can be assumed that ADACE has no support or legal basis to force the requisitions rectification to the taxpayers that attend to PRODECON, by requesting the cancellation of fines applied by Inaccurate General Data, since it is established in Rule 6.1.3, of the current GRFT, it is not related to article 69-G of the Federal Fiscal Code (CFF), since it concerns benefits for the taxpayers, who under verification attributions realize that they have requisitions under infringement, and they can rectify the error, without any fine and, above all, by safeguarding the benefits of cancelling the 100% of fines, for other circumstances if necessary.