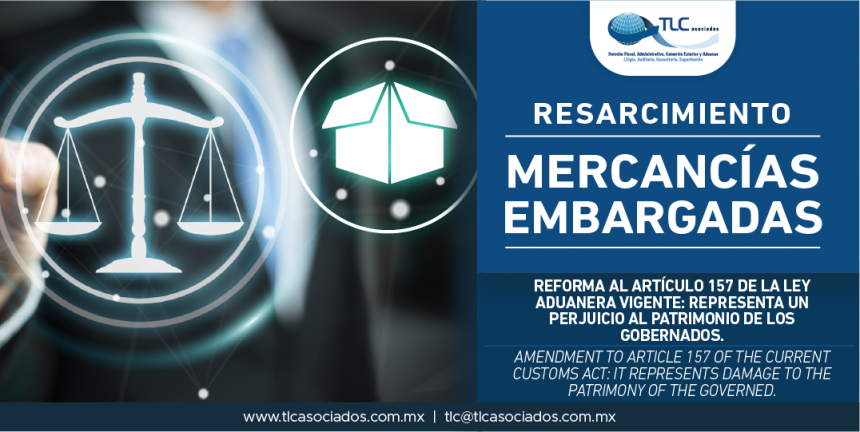 On June 25, 2018, the Decree by which various provisions of the Customs Act were amended, added, and repealedin which a variety of changes that directly affect the subjects of foreign trade was presented, was published in the Official Federal Gazette.

Among the provisions that were substantially reformed, is article 157 of the Customs Act which establishes the procedure that the administrative authorities will carry out with the merchandise that they have precautionarily seized from the governed, which have become property of the Federal Treasury and that, subsequently, they have alienated through the Administration and Disposal of Goods Service.

This article in particular emphasizes the procedure to economically compensate when the governed have obtained a favorable resolution, either administrative or judicial, ordering the return of the merchandise and are unable to do so because it has been sold, donated, destroyed, etc.

Prior to the reform published on June 25, 2018, the Customs Act was not clear in the procedure that the customs authority had to consider in order to authorize economic compensation in favor of the applicants, that is, there was a controversy of criteria, since it established that the value to be considered for granting the compensation was established in the customs classification report and customs value plus the updates in terms of article 17-A of the Federal Fiscal Code.

Particularly, TLC Asociados witnessed the difference of criteria considered by the competent Decentralized Legal Administration when granting economic compensation to applicants, since it sometimes granted it in terms of Article 157 of the Customs Act and in others, granted it in terms of Article 27 of the Federal Act for the Administration and Disposal of Public Sector Assets, by virtue of the Jurisprudence supported by the Supreme Court of the heading: “MERCHANDISE SUBJECT TO PRECAUTIONARY SEIZURE IN A PROCEDURE IN CUSTOMS MATTERS. METHOD OF CALCULATING THEIR VALUE BEFORE THE MATERIAL IMPOSSIBILITY TO RETURN THEM BECAUSE THEY HAVE BEEN DISPOSED BY THE ADMINISTRATION AND DISPOSAL OF GOODS SERVICE (SAE)“.

However, according to the Parliamentary Gazette, Article 157 of the Customs Act is reformed to be in accordance with the criterion supported by the Supreme Court of Justice and currently establishes that the value in customs to compensate the governed must be calculated according to the Article 27 of the Federal Act for the Administration and Disposal of Public Sector Assets, which takes as a basis the value obtained from the sale through auction.

In conclusion, Article 157 of the Customs Act is reformed to identify more clearly in what cases should be compensated according to the value determined in the classification report that the authority rendered at the time of the seizure and which should be done in accordance to the value obtained from the sale by auction of the SAE.

The following table is established for better reference: