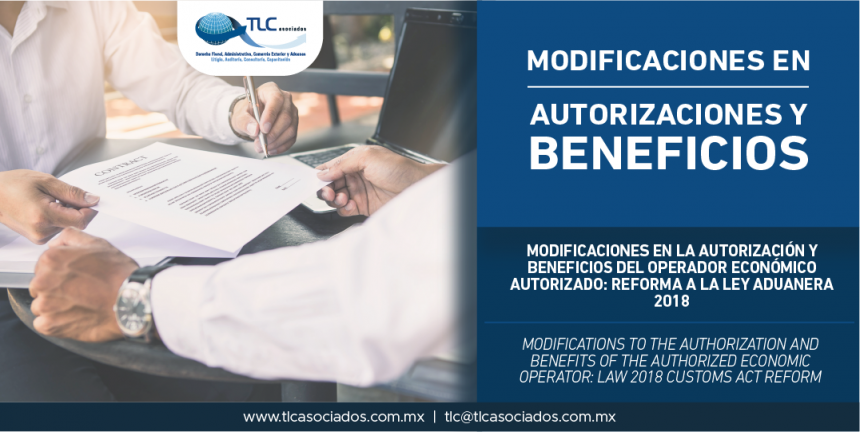 The authorization of the Authorized Economic Operator (AEO) is an internationally compatible scheme with the authorization of the AEO from the regulatory framework SAFE (Standards to Secure and Facilitate Global Trade) issued by the World Customs Organization, whose main purpose is to create standards that guarantee the security and facilitation of the global logistics chain to promote security and predictability, strengthen cooperation between customs and companies, and seek other objectives.

As for this customs certification, articles 100-A and 100-B of this legal system were modified in the Customs Act Reform published in the Official Federal Gazette on June 25, 2018 to be as follows:[1]

“Article 100-A. The Tax Administration Service may authorize the enrollment in the certified company’s registry, even in the form of authorized economic operator, to companies that meet the following requirements: […]

VII. When applicable, that they comply with the minimum-security standards and other requirements that the Tax Administration Service establishes through rules.

Enrollment in the certified company’s registry may also be authorized to natural or legal persons involved in the logistics chain as service providers for the entry and exit of merchandise from the national territory, provided they meet the requirements indicated in this article and those established by the Tax Administration Service through rules.

To obtain the authorization provided for in this article, interested parties must submit an application to the Tax Administration Service, accompanying it with the documentation established in the rules, with which the compliance with the necessary requirements for obtaining it is certified.

“Article 100-B. Companies enrolled in the registry referred to in article 100-A of this Act shall be entitled to the following opportunities: […]

VII. Other measures for simplification and facilitation of customs clearance provided for in this Act or established by rules of the Tax Administration Service”.

Since the 2013 reform of the Customs Act, the figure of the AEO was contemplated, so that only the term of the certification to the first paragraph of article 100-A is relocated. Likewise, in section VI, it only eliminates the requirement to cite the tax domicile of the carrier, and in section VI refers to the compliance with security standards that were previously contemplated in the third paragraph of the mentioned precept.

The second paragraph provides greater legal security by incorporating the figure of the Certified Commercial Partner, considered in the general provisions of foreign trade as a special voluntary authorization issued by the Tax Administration Service aimed at those foreign trade actors that participate in the security of the supply chain, such as the land transport carrier, customs broker, rail transporter, industrial park, bonded warehouses and courier and parcel service, as long as they meet the established requirements and implement the minimum standards necessary in terms of security.

On the other hand, in article 100-B, section VI, an additional benefit of prior voluntary compliance is granted or when the customs authority has exercised its powers of verification. Likewise, section VII replaces the objective of achieving “strengthening of legal security” by that of “facilitation of customs clearance”.

[1]Note: The Amendment to the Customs Act will take effect 180 calendar days after its publication being December 22, 2018.