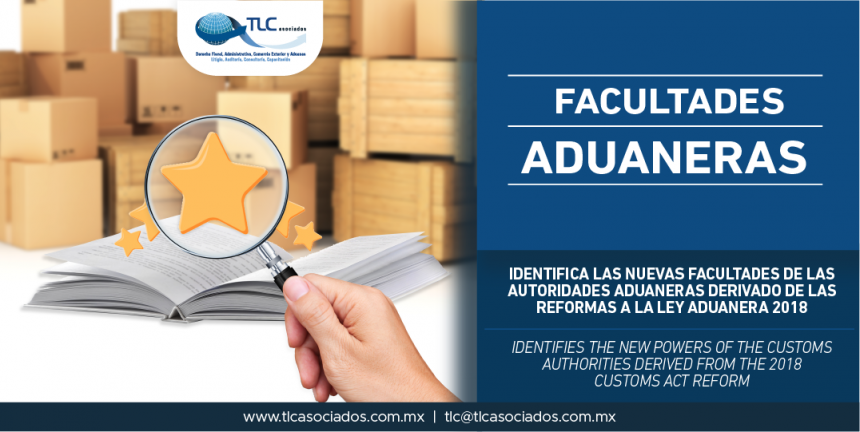 In relation to this topic, in the Reform to the Customs Act published in the Official Federal Gazette of the Federation on June 25, 2018, the following changes were presented:[1]

In December 2013, some provisions of this order were modified to refer the attributions of the Tax Administration Service (TAS) in substitution to the Secretariat of Finance and Public Credit (SFPC). Now again, 17 articles are modified to indicate that the TAS has the competence to issue general rules, comment and issue authorizations.

Article 144 of the Customs Act contemplates the special powers of the Secretariat of Finance and Public Credit that is executed by the Tax Administration Service, where some of them were modified to be as indicated below:

In this precept, only the figure of the customs brokerage firms is incorporated, so in essence the same faculties are maintained.

In this section, the “Revise” faculty is added, a verb defined by the dictionary of the Royal Spanish Academy as “to see attentively and carefully”, or “to submit something to a new examination to correct it, amend it or repair it”.

To exercise the powers referred to in the previous paragraph, the Tax Administration Service may request the report that it requires, to the customs broker, the customs brokerage firm, the specialized authority in the matter according to the merchandise in question or to any other expert”.

In this precept, the competence of the customs authorities related to the determination of the nature, characteristics, tariff classification, origin and value of the import and export merchandise to request opinions including the new figure of the customs brokerage firm and other authorities specialized in the matter is expanded.

“XXII.   Grant, disable and cancel the authorizations of the customs brokerage firms”.

XXIX.   Microfilm, record on optical discs or any other means authorized by the Tax Administration Servicethrough rules, the documents that have been provided to it in compliance with the provisions of this Act.

In this precept, it only exchanges the attribution to the TAS, replacing the Secretariat of Finance and Public Credit itself.

XXXIII.Authorize that the clearance of merchandise can be done jointly with the customs authoritiesof other countries both in national territory and abroad, in accordance with the international treaties to which Mexico is a party, as well as issuing the rules that allow operating said joint office to national legislation, international treaties and applicable interinstitutional agreements, including for the exercise of verification powers in juxtaposed customs and unified border points”.

In the last decade, pilot tests have been carried out on the clearance and joint inspection with customs authorities (Customs and Border Protection) of the United States of America. For example: the procedure that was established for companies in the agricultural sector interested in exporting the goods listed in rule 3.7.30 of the General Rules on Foreign Trade for 2018. Subsequently, in 2016 through the press releases 005/2016 and 022/2016 of the SFPC are informed about the joint customs clearance at the Laredo International Airport, Texas and the Customs Bureau of Otay in Tijuana with the objective of facilitating the clearance of merchandise.

Finally, it is worth mentioning that in this reform the concept of “Juxtaposed Customs” is added, referred to in the Revised Kyoto Convention in 1999 which states: “When the customs offices are located at a common border crossing, the administrations Customs officials will harmonize the hours of attention to the public and the competence of the aforementioned offices “.[2]

XXXV.  Have systems, devices, technological equipment or any other electronic means or service necessary for the exercise of their faculties”.

In this section the right of the SFPC to have all the infrastructure and state-of-the-art technology to comply with the attributions granted by this legal system is added.

“XXXVI.          Suspend in the authorized importers list, as the case may be, in the importers of specific sectors list or in the list of sectorial exporters, importers or exporters, in accordance with the provisioned of the applicable legal provisions

Competence added to the customs authorities for the purpose of suspending the importers and exporters of the general register and the sectoral registers under the assumptions foreseen in the customs regulations. Recall that this precautionary measure by the authorities generated controversies because the power is currently supported under Article 84 of the Customs Act Regulation, and rule 1.3.3 of the General Rules of Foreign Trade for 2018, however, now it is established in the main legal system.

“XXXVII.         Retain foreign trade merchandise when the competent authority presumes an infraction of the provisions that regulate the matter of copyright and industrial property. In exercising this power, the customs authority will act as an auxiliary to the competent authorities in the area of copyright and industrial property, in the terms established in the collaboration agreements and other applicable legal provisions. “

At present articles 148 and 149 regulate the procedure of retention of goods when they are subject to a resolution of suspension of free circulation issued by the administrative or judicial authority competent in matters of intellectual property.

Regarding the reform, the retention power is added to the customs authorities to help when the competent authorities consider the presumption of infractions on the special laws of the subject of copyright and industrial property.

“XXXVIII. Analyze the behavior of customs regimes or groups that make up the scope of importers and exporters by sector, to assist in the identification of illicit behavior related to the entry and exit of goods from the national territory, and propose strategies and implement mechanisms to prevent and combat such behaviors, which may include special measures of customs operations that guarantee the effective combat of the referred improper practices “.

This analytical faculty is added to study the customs destinations, as well as the actors of foreign trade by industrial sector with the objective of detecting illicit conducts in the customs operations, and with this implement preventive and combat strategies for acts that can be harmful for the national economy.

“XXXIX.          The others that are necessary to comply with the faculties referred to in this article“.

This precept changed from section XXXV to section XXXIX, where it also makes a modification in the wording to refer to “comply” by “make effective”. However, this type of future faculties have always been questioned.