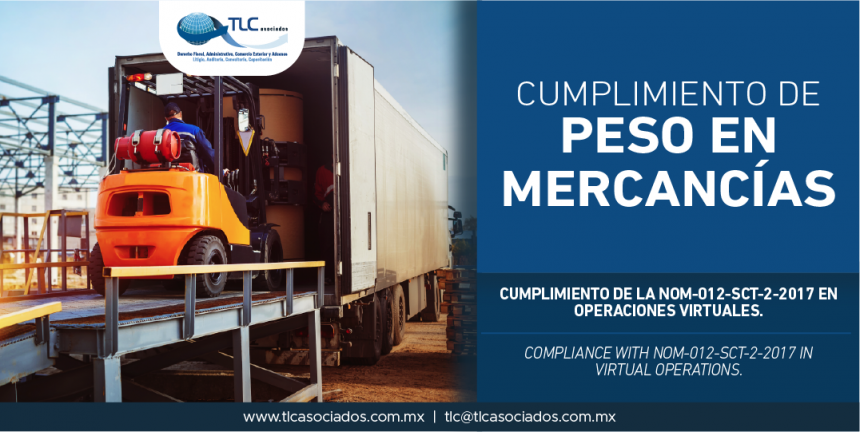 OnApril 20, 2018, the FIRST Resolution of modifications to the General Rules of Foreign Trade (GRFT) for 2018 is announced, which report the modification of Rule 4.3.19, section I, subsection b), numeral 1, which refers to the request forms that are processed may cover the goods that are moved in a single vehicle and the weight that is consigned in each transport may not be greater than that established in NOM-012 -SCT-2-2017.

However, for the purposes of the provisions of regulation 4.3.19, it is important that the weight, which can be carried by a single vehicle, be met, as well as the maximum dimensions that can be used by motor vehicles traveling on highways of federal jurisdiction, that is, that they comply with the specifications established in NOM-012 -SCT-2-2017, published in the Official Federal Gazette (OFG) on December 26, 2017, as established in regulation 4.3 .19, section I, subsection b), numeral 1:

“4.3.19. For the purposes of articles 112, first paragraph, of the Act, 166 of its Regulations and 8 of the IMMEX Decree, companies with the IMMEX Program that transfer temporarily imported goods to other companies with the IMMEX Program, to companies in the automotive industry or Manufacture of motor vehicles, or to people who have the authorization to destine merchandise to the strategic bonded warehouse, will be to the following:

b) For purposes of the provisions of this rule, the request forms that are processed in terms of the previous paragraph, may cover the merchandise that is transferred in each transport vehicle as a different operation, using the following means, without the need of physical presentation to customs:

In relation to the aforementioned, said provision is for the operations of virtual transfers either in a single operation or consolidated request form, which are conducted by highway means, which must comply with the formalities regarding the weight, size and capacity of motor transport vehicles in accordance with NOM-012-STC-2-2017, this characteristic is for each vehicle, which transits on roads and bridges of federal competence.With the exception of those who process a special permit before the Secretariat of Communications and Transportation (SCT), where only a greater weight may be granted.