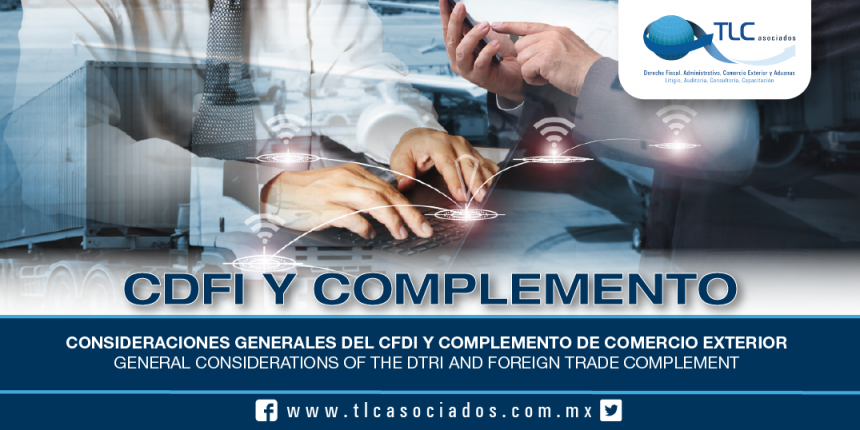 ISSUANCE OF DTRI INVOICES WITH FOREIGN TRADE COMPLEMENT TO EXPORTS.

It is brought to attention, for foreign trade users, important data to be considered for the issuance of DTRI invoices (Digital Tax Receipt via the Internet), which in accordance with article 36 and 36-A, section II, subsection a ), of the Customs Act, those who export merchandise with A1 code, of Appendix 2 and Annex 22 and that in turn are subject to transfer, must transmit the electronic DTRI file and set in the corresponding field of the request form, the tax foil numbers of DTRIs.

This issue came into force as of July 1, 2016 with the issuance being optional, then published a change in the Official Federal Gazette making it mandatory as of March 1, 2017 when dealing with transfer in accordance with article 14 of the FFC, in addition to this, as of January 1, 2018, it became obligatory to declare the foreign trade complement, which must be issued for the income received or withheld from duties made by taxpayers, whether individuals or legal persons.

Therefore, it is understood that the foreign trade complement is an annex to the DTRI invoice which allows to declare foreign trade data, issuer, recipient and addressee, as well as to detail more broadly the description of the merchandise.

In relation to the foregoing and in accordance with rule 3.1.34, when dealing with transfer transactions, only the DTRI invoice with complement and request form must be issued, and it is not necessary to declare and transmit the acknowledgment of value. It is worth mentioning that the printing of the XML file and the printed invoice in PDF format must be transmitted as an e-document through the Single Window.

In accordance with article 29-A of the Federal Fiscal Code, the Digital Tax Receipt must contain the following fields:

1.-FTR of the issuer, as well as the tax regime under which he pays taxes.

2.-Foil number and digital seal of the Tax Administration Service.

3.-Place and date of issue.

4.-FTR of the recipient.

5.- Quantity, unit of measure and class of the goods or description of the service or use or enjoyment covered.

6.-Unit value of the merchandised goods.

7.-The total amount entered in number and / or letter.

As a result of the foregoing, it is reported that as of January 1, 2018 the transition period ended, making the DTRI invoice issuance with the complement for foreign trade mandatory, declaring the fiscal foil in the request form otherwise the transfer of export merchandise under the A1 request form code will not be allowed.