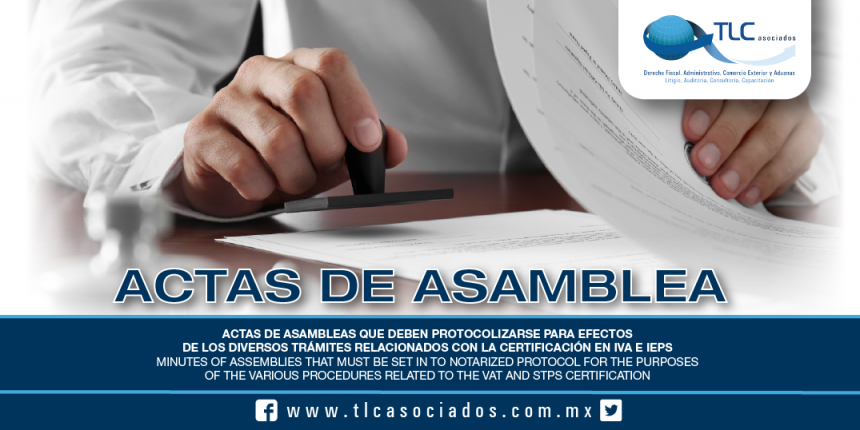 There are approximately 3,500 companies certified in the VAT and STPS modality to date throughout the country, and within their obligations, specifically the one indicated in rule 7.1.1., first paragraph, section I, as well as the various stipulated in the rule 7.2.1., Both of the General Rules of Foreign Trade in force, one of the most recurrent doubts arises, consisting of knowing which are the minutes of assembly that must be set in to notarized protocol before a Notary Public.

This question arises because the aforementioned rule 7.1.1., states that the legal entities must be constituted in accordance with mexican legislation, which refers us to the General Act of Commercial Companies (GACC) which in turn tells us in its Article 5 that the companies will be constituted before a notary public and in the same way their modifications will be stated, reason for which the main doubt is generated, if any act of assembly must be notarized before a notary public, or only those established in the law.

On the other hand, rule 7.2.1., indicates that in order to comply with the Company Certification Scheme Registration, it must be reported monthly to the General Administration of Foreign Trade Audit (GAFTA) through the Digital Window, during the First 5 days of each month, any modifications of partners, shareholders, as appropriate, legal representative with authority for acts of ownership or members of the administration, without mentioning whether the aforementioned changes in the administrative board, should be set in to notarized protocol before notary.

By virtue of the above and in the search to clarify this uncertainty, we refer to the content of articles 181 and 182, as well as 194, all the GACC, which roughly indicate that only the minutes of extraordinary assemblies should be set in to notarized protocol before Notary Public, and only when an ordinary one cannot register in the respective book, it must also follow the provisions for extraordinary minutes.

Under the aforementioned considerations, and in accordance with the provisions of the aforementioned legal systems, it should be noted that the obligation to set minutes in to notarized protocol rests exclusively with the extraordinary assemblies, and ordinary ones only in the specific case mentioned in the preceding paragraph, this notwithstanding, in practice we find that the authority opposing these provisions may require us to have all the ordinary acts settled in a notarial instrument, regardless of the case in which they are found.

So in conclusion in the case of a requirement by the authority, companies choose to proceed with the protocolization of the minutes, even if they are not obligated according to the provisions that regulate it, in order not to jeopardize their certification in the form of VAT and STPS.