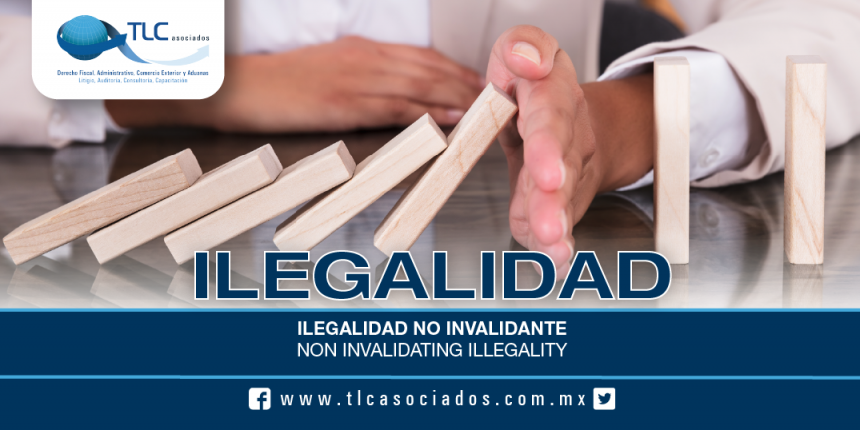 The Superior Chamber of the Federal Court of Administrative Justice, issued Thesis number (VIII-P-2aS-69), whose title is:

“NON-INVALIDATING ILLEGALITY.- CASE IN WHICH IT IS CONFIGURED REGARDING THE SECOND PARAGRAPH OF ARTICLE 63 OF THE FEDERAL FISCAL CODE “, criterion that provides that, in accordance with article 51, section III and second paragraph, of the Federal Act on Administrative Litigation Procedure, the acting of a procedural defect is conditioned to it affecting the defenses of the individual and transcends the meaning of the contested decision,

so if you does not meet those two elements, then, we are in the presence of a non-invalidating illegality; in this context, the second paragraph of said article 63 provides that if, during the audit, the authority is provided with files or documents related to the taxpayer, then, they must grant him the period of fifteen days to formulate the manifestations that may take place, however, we will be in the presence of a non-invalidating illegality, if the authority fails to comply with said legal precept, but in accordance with section IV of article 46 of the Fiscal Code of the Federation, discloses the files or documents in the last partial certificate, this in view of the fact that in this phase of the audit the taxpayer can make the corresponding declarations and provide evidence to controvert them, hence, it would have no effect to replenish the audit to grant the period of fifteen days alluded to in the aforementioned article 63, if the right to due process of the taxpayer was respected in the phase between the last partial act and the final act.

That is, this criterion establishes the fact that on the one hand article 63, second paragraph of the Federal Tax Code, gives the taxpayer the right during the visit, to be made aware of documents or files related to him and that have been provided to the acting authority, so that he can make manifestations, so if the authority is omitted in granting that right, we would be before a procedural defect that would generate a partial nullity of the act, however if the authority at the same time makes known to the governed the files or documents of the last partial act , in terms of section IV of article 46 of the Code, then we would be facing a NON-INVALIDATING ILLEGALITY, because in kind the authority would have replaced an omission with the granting of another right, which finally led to the same end, that is, to discredit or provide elements of defense to the performance of the inspector, that is to say, the right to due process of the governed had been respected in any way, since, in addition, the replacement of the visit would have no effect in order to be grant the denied right, if in any case it would have been granted the right to visit to make statements against the actions of the authority, to have transferred these files and documents to the bearer, although it would have been in terms of another legal provision.