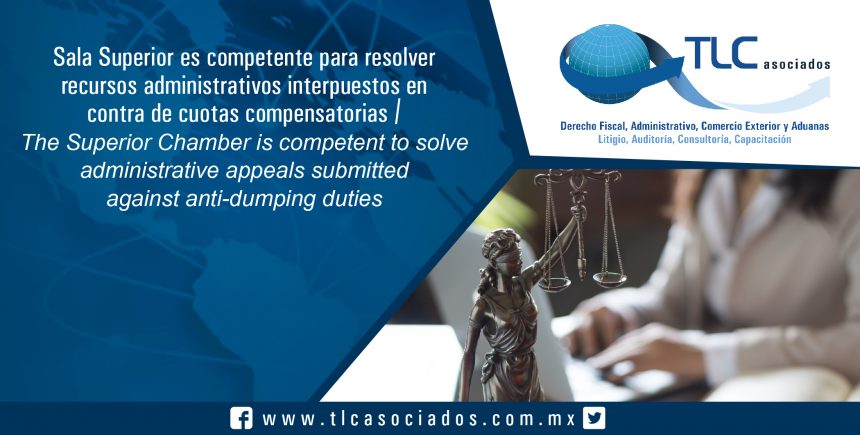 We bring to your attention the Jurisprudence with heading: “DEFINITE COUNTERVAILING DUTIES IN THE FIELD OF FISCAL AND ADMINISTRATIVE JUSTICE, KNOWING THE RESOLUTION DICTATED FOR REASONS OF FOREIGN TRADE. IT IS COMPETENCE OF THE SECTIONS OF THE SUPERIOR CHAMBER OF THE FEDERAL COURT OF THE DEFENSE VIA RESOURCE OF REVOCATION AGAINST THE CONTINUATION OF ITS EFFECTIVENESS”,

where the Second Section of the Superior Chamber upholds the competence of the Sections of the Superior Chamber to hear and resolve federal administrative disputes that address the matters indicated in article 94 of the Foreign Trade Act, except in those cases where only the application of countervailing duties is being contested. Notwithstanding the foregoing, the Court is competent to hear such resolutions in the matter of foreign trade and those that decide administrative appeals against such resolutions, respectively; therefore, if a decision is being challenged against an administrative appeal for revocation filed against a different resolution that determined the existence of definitive countervailing duties for another five years, it is clear that the Sections of the Superior Chamber would be competent to give final judgment.

That said, the distinction is made between the final resolutions issued by the authority established in article 94 of the Foreign Trade Act and those that resolve the administrative procedures established in the Customs Act and in the Federal Fiscal Code; in the sense that, according to the criterion mentioned here, in order for the Sections of the Superior Chamber to have jurisdiction to hear and resolve the matters indicated in article 94 of the Foreign Trade Act, it would be mandatory to first exhaust the administrative revocation resource.