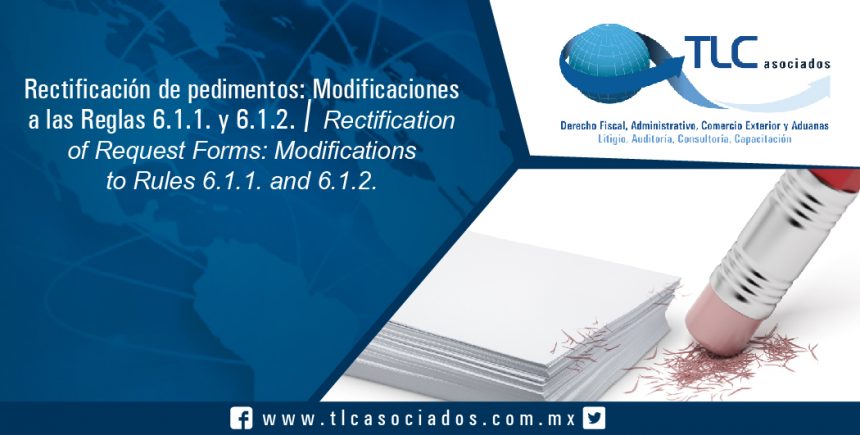 On September 1, 2017, the Second Resolution of Modifications to the General Rules of Foreign Trade for 2017 was published in the Official Federal Gazette (OFG), from which come changes made to the rules corresponding to rectification of request forms; rule 6.1.1. and rule 6.1.2.; which consist of the following:

In Rule 6.1.1. of the General Rules of Foreign Trade (GRFT) for 2017, subsection F) to fraction I, was added as an exception to the authorization from the First Modification Resolution, published on April 28, 2017 in the OFG, which makes reference to the possibility of rectification of the request form when an undue payment resulting from a final resolution issued by the Secretariat of Economy is generated, where it is determined to revoke countervailing duties or when they have been paid improperly for being products that were not subject to them .

The rectifications of tariff rate will be solved in accordance with the procedure of rule 6.1.2, even if the interested party had generated an undue payment.

“In the case of definitive imports and exports, temporary imports and their returns or the introduction of goods into the bonded warehouse, when the result of the automated selection mechanism has determined free customs clearance, they may rectify the tariff rate declared in the corresponding request forms and, in its case, derived from it, the data relating to the tariff measurement unit and the quantity according to the unit of measure of tariff may be rectified, provided that the customs authority has not started exercising its powers of verification; the inexact tariff classification does not imply non-compliance with a non-tariff regulation or restriction and payment of the fine is made for inaccurate data referred to in article 185, section II of the Act. In the case of temporary imports by companies with IMMEX Program, the new tariff item shall correspond to goods required to carry out the productive processes registered in its program in accordance with Article 11, antepenultimate paragraph, of the IMMEX Decree. “

However, as mentioned previously, derived from the Second Resolution of Modifications recently published, the rules in question have merged, leaving previously stipulated in Rule 6.1.2., as part of the fourth paragraph of Rule 6.1.1. . Therefore, Rule 6.1.2. as we knew it, was been repealed.

“Rectifications of tariff classification will not require the authorization referred to in this rule, even if the interested party had generated an undue payment, provided that the obligations regarding countervailing duties and other regulations and non-tariff restrictions, OMS and estimated prices required for the new tariff classification are complied with”.

The reform made in September to the aforementioned numerals represents facilities in favor of the taxpayers who import and export goods, for requesting an authorization to rectify a petition, in most cases, involves delays that by the same factor of the time has the effect that the rectification of the request form does not materialize.

Therefore, it is important for foreign trade users to keep in mind those cases in which they can correct their operations without requesting authorization from the competent authority.