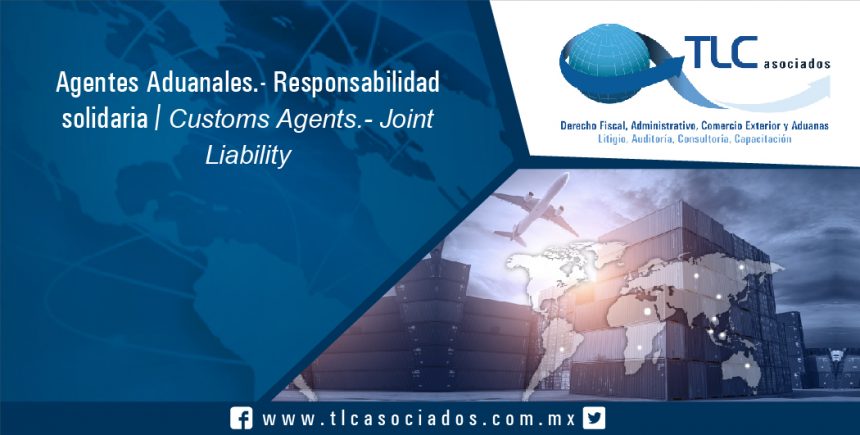 The Customs Law indicates that they are obligated to the compliance of the mentioned Law, of the one of General Taxes of Import and Export, and the other laws and applicable regulations that control the entry into national territory and the exit of goods from it and of the means where they are transported or conducted, either their owners, possessors, recipients, senders, representatives, customs agents, or any other person that intervenes in the introduction, extraction, custody, storage, handling, and possession of the goods; the Customs Law itself, indicates that the processes regarding the clearance of the goods will be promoted by the importers or exporters or by means of the customs agents that act as their consignees or representatives; also, it indicates the cases in which the customs agents acquire the character of legal representatives of the importers and exporters, highlighting those acts that result from the customs clearance of the goods, if they are celebrated within the fiscal precinct.

Additionally, the mentioned Law establishes that the customs agents and their representatives are jointly liable for the payment of foreign trade taxes and of the other contributions, as well as of the countervailing duties that are caused due to the introduction of goods into the national territory and the extraction from it, that result from the imports or exports in the customs clearance where they intervene personally or through their authorized employees.

Also, the customs agent will be responsible for the veracity and accuracy of the data and information provided, of the determination of the customs regime of the goods and of their correct tariff classification, as well as making sure the importer or exporter has the documents that prove the compliance of the other obligations that in the matter of regulations and restrictions operate for such goods.

In this context, the thesis of jurisprudence published by the Federal Tribunal of Administrative Justice becomes relevant, titled “CUSTOMS AGENT.- SCOPE OF THE RESPONSIBILITY”, in which it is determined that the article 53 of the Customs Law establishes, that the customs agent is jointly liable for the payment of foreign trade taxes, of other obligations, and of the countervailing duties that are caused due to the imports or exports “(…) in the customs clearance where they intervene directly or through their authorized employees (…)”, therefore, the strict interpretation of the provision mentioned indicates that the responsibility comes from the fact itself of having assumed, voluntarily, to intervene personally or through the authorized employees, in the clearance of the goods, customs regime and the chosen path, existing in the period, where the customs authorities could legally execute their faculties of determining the contributions and other fiscal credits, and to sanction the unfulfillment to the law, therefore it is incorrect to understand that the joint liability is limited to the duration of the customs clearance, since the fact that the custom agent intervenes in the phases of the mentioned administrative procedure is enough, in particular, to the moment of the examination of the goods to suggest the tariff classification and valuation in customs, of the determination of the amount, of the fiscal credits alluded, in the respective customs declaration for the legal hypothesis of joint liability to take effect.