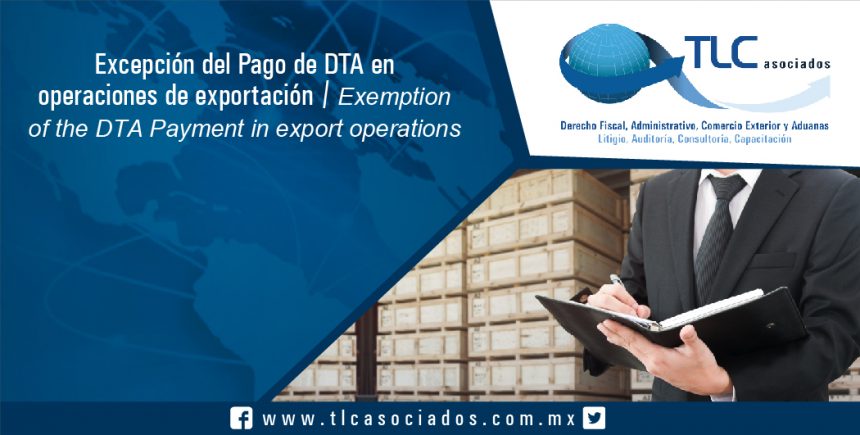 In this newsletter, we inform you important aspects to consider for the payment of DTA in export operations that origin from returns of temporarily imported goods in accordance with the stipulated in the article 49 of the Federal Law of Rights (LFD).

The right of customs clearance will be paid, for the customs operations that are carried out using a customs declaration or the corresponding customs document in the terms of the Customs Law, according to the following rates or fees:

Within the generalities of the article 49, where the collection fees due to the transport of goods by the customs to national territory are established, as stated below:

Now, for the export, there are also fees that must be covered for the return of the inputs imported in the first instance under the assumption of any of the three sections previously mentioned.

For this, we would adhere to the second paragraph of the article 49 of the LFD where it is manifested that for those goods that are referred in the sections I and II of this article, to the goods that pay the 8 to the thousand or the 1.76 to the thousand on the value of the goods to import, if they had made the corresponding payment of DTA through a customs declaration by operation or by consolidated document, the DTA will not be paid for the return of such goods.

In regards to this, there is also another benefit to exempt from the payment of the DTA on exports, according to the rule 5.1.4 of the General Rules of Foreign Trade for 2017, under the assumption that any of the free trade agreements where Mexico is a party is applied, among which the following are emphasized:

II. TLCCH, in accordance with the article 3-10.

III. TLCC, in accordance with the article 3-10.

It must be noted that to benefit from both the article 49 of the LFD and the rule 5.1.4. of the General Rules of Foreign Trade for 2017, different items must be considered; for example, having applied the tariff preferential treatment correctly or had correspondingly paid such tax in the import operation.
In the export operations, within the settlement table, the payment form of the DTA must be considered, since if being in any of the previous cases, the payment form that will correspond is the 13 (already paid), according to the Appendix 13 of Annex 22 of the RGCE for 2017.