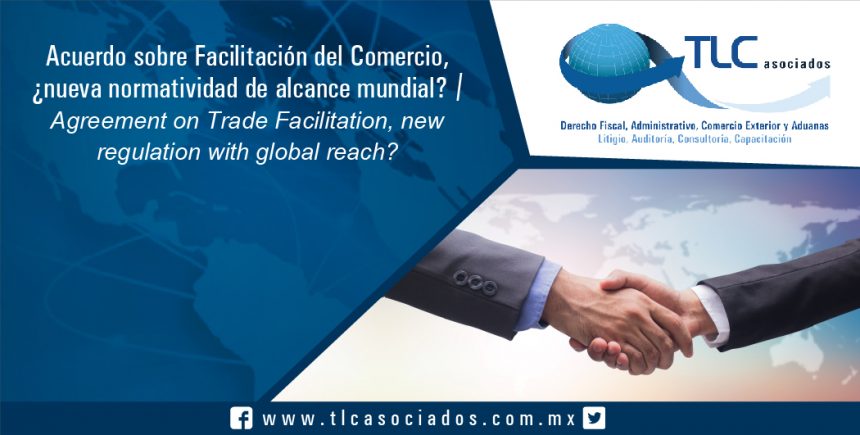 This February 22nd was historic for the World Trade Organization and in general for the members that belong to it, among them our country, because from that date the Agreement on Trade Facilitation came into force after being ratified by 110 nations; this international document is part of the Amendment Protocol of the Marrakesh Agreement, by which the World Trade Organization is established, adopted in the City of Geneva, Switzerland, on November 27th, 2014.

Hong Kong was the first country that notified the acceptance of the Agreement on Trade Facilitation to the WTO on December 8th, 2014; the first country that in the year of 2015 accepted the AFC was Singapore; the first in 2016, was Georgia and, Mexico submitted its ratification to the General Director of the WTO on July 26th, 2016. On February 22nd, 2017, Chad, Jordan, Oman, and Rwanda go to the mentioned Trade Organization, completing with it the third part of the member countries of the WTO, necessary for the entry of validity of the mentioned Agreement; up to May 5th, 2017, 118 countries had attended to assume their commitment.

In a report on world trade, the WTO states that the facilitation is essential to reduce the costs of the trading activity that are still high despite the decrease of the transportation cost, the improvements in the technology of the information and the communications and, the reduction of the obstacles to trade in many countries. The “new theory of the trade” intends to explain the reason why only some large and productive companies can access to the export market, while other can only sell nationally. Based on this theory, the facilitation of the trade reduces the costs of the activity both variable (costs that vary due to the scale of the trade) and fixed (costs that must be covered before entering the export market), such as the learning of the trade procedures of a country. As a result, not only the already existing exporters obtain a higher quota of the market but, the companies with a lower level of productivity access the export market for the first time.

The models based on supply chains recognize that the components integrated into complex final products are manufactured in very different countries. As a result of that way of organizing the global production, the trade costs accumulate and increase through the value chain, therefore, the inefficiency of the procedures applied in the border have an important deterrent effect of the trade. In the other hand, the facilitation of the trade has an extensive positive effect on the trading activity of the value chains and increases the specialization of the production phases in which other countries have a comparative advantage.

The total implementation of the AFC would reduce the costs of the global trade estimated at an average of 14,3%, and the African countries and the least developed countries would be the ones that jointly would reduce more the trade costs. Additionally, the total implementation of the Agreement is estimated to reduce the average time necessary to import in 47%. The time  to export would be reduced even more; estimating up to a 91% compared to the current measure.

The AFC is innovative for the developing countries and the LDC due to the way it is going to be implemented. It is the first Agreement of the WTO that enables the Members to establish their own calendars of implementation and expressly links the advances in the implementation to the technical and financial capacity. Also, the Agreement establishes that there must be aid and support to help the countries to reach that capacity; this approach is coherent with the economic concept according to which developing countries must be allowed to adapt their trade commitments in reason of their size, with a small frequency, their considerable limitations of resources, and the existence of numerous failures of the market.

In general, the measures of trade facilitation regarding the transparency and the clearance of the goods have fewer costs of implementation that the ones related to the cooperation between the bodies that intervene in the border and the formalities, that could require investments in the technology of the information, infrastructure, and equipment.

In addition, in this context; the WTO, the Members of the WTO, and other intergovernmental bodies, like the World Bank, the World Customs Organization, and the United Nations Conference on Trade and Development (UNCTAD), must give technical aid for the facilitation of the trade; thus, in July 2014, the WTO announced the launch of the Mechanism for the Trade Facilitation Agreement that will help the developing countries and the least developed countries to implement the Agreement. The Mechanism began functioning on November 27th, 2014, when the Protocol relative to the Trade Facilitation Agreement was adopted.

Finally, in the mentioned report on global trade, the WTO concluded that aside from the quantifiable economic benefits, there are systematic effects that open favorable perspectives for the system of global trade and the multilateral standards in which that system is based upon. The AFC is the first multilateral agreement negotiated successfully in the WTO since the Organization was created two decades ago. This result shows that the elaboration of global reach standards could be an appropriate answer to the trade obstacles that concern the companies today. Lastly, it is essential to monitor the implementation of the AFC to assess its progress, detect problems, and determine up to what point its provisions on special and differentiated treatment are efficient. Monitoring the implementation of the AFC must consist, among other things, in evaluating the economic results and drawing a more comprehensive frame where the Agreement increases the trade and reduces the costs. The WTO, along with other international organizations and regional Banks of development, must allocate more resources to collect data, in particular on the costs of the implementation, improve the analytical indicators and instruments that exist and elaborate new ones to monitor and assess more efficiently the implementation of the Agreement.