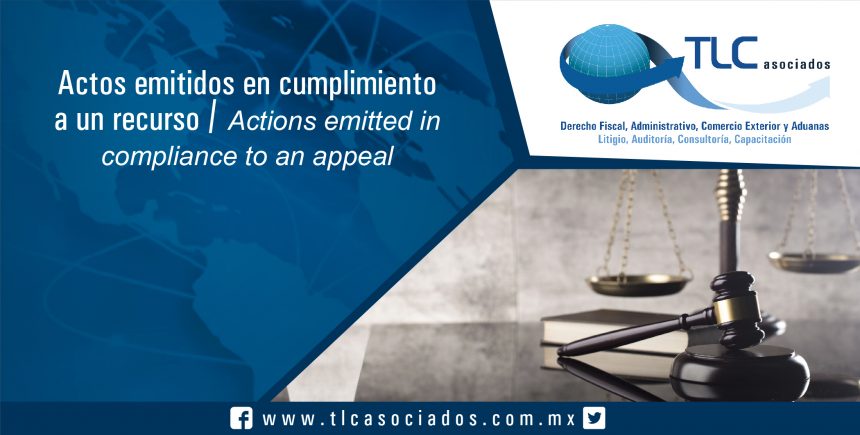 The Second Chamber of the Nation´s Supreme Court of Justice published the Thesis of Jurisprudence number (2a./J. 113/2016 (10a.), under the heading: “ACTIONS EMITTED IN COMPLIANCE TO THE RESOLVED IN AN ADMINISTRATIVE APPEAL. IS OPTIONAL FOR THE INTERESTED PARTY TO FILE AGAINST IT, FOR A SINGLE TIME, THE APPEAL FOR REVOCATION BEFORE GOING TO AN ADMINISTRATIVE CONTENTIOUS TRIAL”, criterion that stipulates that the article 120 of the Fiscal Code of the Federation reveals the will of the legislator of granting to the individual the possibility of choosing the administrative review or the jurisdictional to contest the act adversely affecting, unless there is any situation where any other legal principle must be safeguarded, and thus, according to the article 125, first paragraph of the legal provision itself, regarding actions emitted in compliance to the decided in an appeal for revocation, specifically the first time, there are no elements that justify an exception to such general rule, since the purpose of granting a treatment separately from the prior or resulting actions of another previously challenged is evident, where the interested party has the obligation to resort to the same review, consequently it could not be understood that the exception to the opportunity of election of the means of defense  is extended; especially if the correlative regulatory statement used the word “could” which, in a logical and consistent sense, must be read as a possibility to Access the appeal for revocation for just one time, but not as an obligation to do so, therefore, in the case of resolutions emitted in compliance to the decided in an appeal for revocation, for a single time, it will be optional for the interested party to file against it the administrative appeal or try, immediately, the trial with the Federal Tribunal of Administrative and Fiscal Justice.

Indeed, the decision of the Second Chamber of our Supreme Court at the time of deciding a contradiction of thesis based its decision in the fact of considering that the intention of the legislator in such assumption contemplated in the article 125 of the valid Fiscal Code of the Federation, was to treat it differently from the general rule contained in the article 120 of the same legal provision, according to which, while  the choice is given to the governed party to file both means of legal defense optionally, it is also true that it obliges them to use the same route elected when challenging prior or resulting actions; therefore, in the case analyzed it is considered that such limitation does not apply, and the right granted to challenge, for a single time, concerning resolutions emitted in compliance to another one emitted in an appeal for revocation, is completely optional before going to the Federal Tribunal of Administrative Justice, this is, the submission of such appeal is not obligatory, even when the prior or resulting action is another administrative appeal, reaffirming, that in this case a separate treatment is given to the general rule that operates to the related actions due to the chosen review, hence, in light of a resolution emitted in compliance to an appeal for revocation, the governed party has evidently the right to choose the same route, for a single time, or file directly the administrative contentious trial.