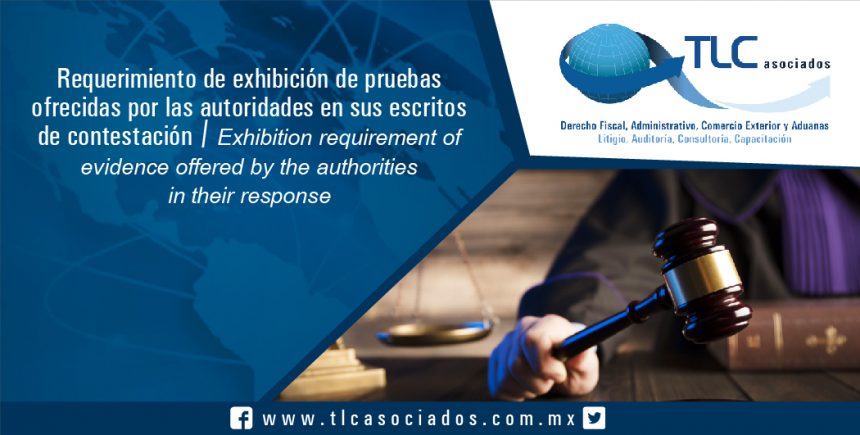 In one of the recent criteria emitted by the Eighth Circuit in Plenary Session, it was concluded that, just as the articles 15, Section IX and second last paragraph, 17, second and fourth paragraph, and 21, penultimate paragraph, of the Federal Law of Administrative Contentious Procedure state it, both the complainant and respondent, are obligated to submit the evidence that they offer in reason of the lawsuit, the extension, or response.

Now, it must be noted that the thesis “EVIDENCE IN THE FEDERAL ADMINISTRATIVE CONTENTIOUS TRIAL. IF THE AUTHORITY OFFERS IN ITS RESPONSE THE ONES THAT PROVE THE FACTS THAT SUBSTANTIATE THE CHALLENGED RESOLUTION, DENIED BY THE COMPLAINANT, BUT DOES NOT ATTACH THEM, THE CHAMBERS OF THE FEDERAL TRIBUNAL OF ADMINISTRATIVE JUSTICE MUST REQUIRE THEIR EXHIBITION”, specifies that, in regards to the challenged action or its notification that the complainant manifested to ignore them, due to the express provision of the article 16, section II, of the mentioned law, the requirement is not appropriate.

Due to the above, this criterion could be used by the taxpayers that in a nullity trial manifest to ignore the actions of the requested authorities, who not only must offer and exhibit the corresponding evidence, but the Federal Tribunal of Administrative Justice is also obligated to request these when offered evidence is not attached.