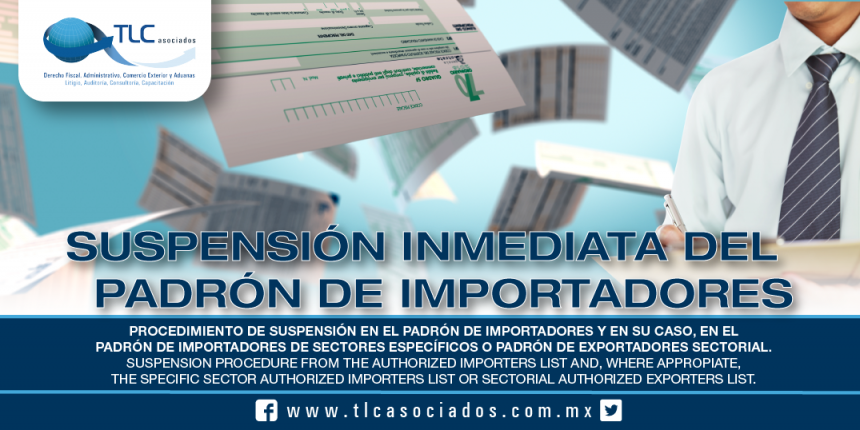 The immediate suspension will be notified through the following means:

However, the immediate suspension according to the procedure previously indicated is not applicable for companies that have the Company Certification Scheme Registration in the VAT (Value Added Tax) and STPS (Special Tax on Production and Services) modality, since in accordance with rule 7.3.1., subsections IV, of Section A and I of Sections B and C, and last paragraph of the General Rules of Foreign Trade in force. The procedure for the aforementioned companies will be followed as follows:

In this sense, as you can see the procedure established for companies that have the aforementioned Company Certification Scheme Registration in the VAT and STPS modality, have the benefit of not being immediately suspended from the Authorized Importers List, because in any case they must first be granted a period to present the evidence and arguments that they consider appropriate, and once the corresponding period elapses if the evidence provided does not invalidate the grounds for suspension or they are not presented, they will be notified the corresponding suspension.

Therefore, it is of vital importance in the case of companies with Registration in the Company Certification Scheme in the VAT and STPS modality, to be always aware of the notifications received through the various electronic means, since a timely response to the notification of the start of the procedure of suspension in the Authorized Importers List, has the opportunity to invalidate the grounds for suspension without losing at any time its registration and of course without having to stop carrying out foreign trade operations that are required for the production process.

For the case in which the companies that do not have the Registration in the Company Certification Scheme in the VAT and STPS modality, although the regulations do not provide for a procedure prior to the suspension so that they are able to invalidate the reason that is attributed to them and may have at all times the enjoyment of their registration, there is the possibility of requesting the authority to annul the suspension Authorized List, and be reincorporated into it, following the procedure established in rule 1.3.4. , of the General Rules of Foreign Trade in force.